In addition, the council discussed a proposed resolution opposing hate and violence directed at Asian Americans.

The council honored Rogers virtually for her many years of volunteering in Mountlake Terrace. Rogers, who will be moving, also will be receiving a physical plaque celebrating her service. Among her efforts, she has served on the Mountlake Terrace Recreation and Parks Advisory Commission, been involved with several civic advisory task forces and committees, participated in official clean-up events, assisted with the annual tree lighting ceremony, and worked at the yearly Tour de Terrace.

Many of the councilmembers noted that before they were elected to the council, they first got to know Rogers while serving on various advisory committees — and added she had been of great assistance in their civic involvement activities. They all expressed the sentiment that she had left a lasting impact in Mountlake Terrace and would be greatly missed.

Councilmember Bryan Wahl said that when he was first appointed to the city council, Rogers was one of the first people he turned to in order “to learn more about what’s going on in Mountlake Terrace and teach me the ways of the world here….And all of your work that you’ve done (with the city) has really brought us a long, long ways since we both moved to the community back in the ’90s,” he said.
Councilmember Laura Sonmore added that it was hard to see Rogers leaving the city. “I do know you’ll be missed in our community of Mountlake Terrace, you did so much for our community,” Sonmore said. “You dedicated blood, sweat and tears….You served our community well and left a lasting impression on all of us.”

Rogers said she was “blown away” and “humbled” by the official recognition for her many years of efforts, which she did “because I enjoyed it.”

She thanked city staff and volunteers for the various opportunities and help with all that she was involved in. “I grew and learned so much being able to participate, some of my fondest memories were being able to help lead some of the community meetings for the master plans for the various parks,” Rogers said. “Working in the parks to clean them up we made such a difference in how they look today versus what they did when I first started.” 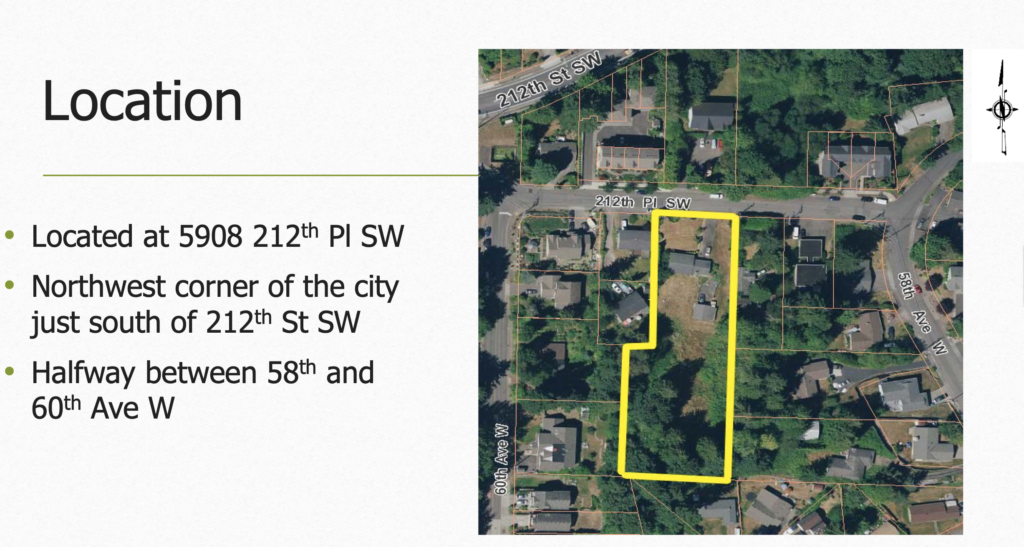 Regarding the proposed housing development planned for 212th Place Southwest, the application from developer 53rd Ave W, LLC involves an existing 1.23-acre lot at 5908 212th Pl. S.W. The plan calls for demolishing an existing home on the property and then dividing the land into eight lots as a planned unit development. The lot would also require a concurrent rezone because it is located in a neighborhood zoned for single-household residences.

Average lot size in the development would be approximately 3,500 square feet. The development’s proposed homes would feature a mixture of four design plans with differing elevations. Plans call a “traditional northwest and craftsman” architectural theme that would serve as both a unifying element within the property and also blend in with existing housing in the residential areas surrounding the project.

The project includes the creation of a new public road for access to the units, construction of stormwater facilities, landscaping, pedestrian circulation, public access to a private “mini”-park on the property and street frontage improvements.

Each home would have both two garage and two driveway parking spots, with the exception of one lot. That lot would have two parking spots through a carport-style structure. The proposed project would also create an on-street parking lane along the length of its public road through the property.

City staff have determined that the plan conforms to city subdivision standards, is consistent with zoning and land use regulations, and met all related requirements. The staff and Mountlake Terrace Planning Commission have recommended to the city council that the 212th Place Southwest planned unit development and concurrent rezone be approved.

There will be a public hearing and council vote on the proposal during the council’s upcoming business meeting Monday night, April 5.

The council also discussed a proposed city resolution that denounces “xenophobia and anti-Asian discrimination caused by the COVID-19 pandemic and supporting the Asian and Asian American communities.” Originally, the work/study session’s agenda called for a vote to adopt the resolution, but several councilmembers suggested possible wording changes may be needed before approval. Particularly, they said it seemed that the statement implies such discrimination was caused by the pandemic and noted that such bigotry had existed in the U.S. and the Pacific Northwest long before the coronavirus outbreak.

Councilmember Steve Woodard suggested the statement be edited to reflect that such discrimination was “heightened” during the pandemic. Most of the council was supportive of the possible change in wording.

Voting on the resolution was put off until Monday night’s meeting to provide more time for possible edits and also give the public a chance to weigh in on the statement’s specific wording.

In other business, Recreation and Parks Director Jeff Betz informed the council that a deaccession policy for city-owned art pieces is necessary. Deaccessioning is a procedure for withdrawing an artwork from the city’s permanent collection and then determining what to do with it afterward, such as a sale or exchange of the piece(s). He noted that typical city procedures in place for surplussing items don’t fit this.

Since the city established the Mountlake Terrace Arts Advisory Commission in 1976, part of the commission’s duties include acquiring works of arts for public display. Over the decades, many pieces of artwork have been collected, which has created a backlog of stored art that is either in disrepair or no longer remains useful to the location where it was originally installed.

Betz provided as an example the bronze statue titled “Mother Justice,” which was purchased and installed nearly 30 years ago at the entrance to the Mountlake Terrace Police Station. During the station’s ongoing remodeling and construction of an addition, it had to be moved. The Arts Advisory Commission has expressed a desire to relocate the statue because there isn’t an appropriate place to reinstall it nearby that would be true to its original intent.

Subsequently, the sculpture’s artist was contacted and responded that he would like to purchase the statue back from the city. After researching the city’s code for dealing with this type of issue, along with examples of other cities’ deaccession policies, the advisory commission and city staff have recommended that the council adopt such a procedure.

Their recommendation notes that having a policy approved will be important moving forward because of the current age and condition of some of the city’s art pieces which cannot be repaired or now no longer fit their intended purpose.

Such a policy would also cover various other situations that may arise such as emergencies due to safety, significant adverse public reaction over time, or a written request from the artist that they would like the work removed from public display. Artwork identified as possibly needing to be deaccessioned would require a report from the Arts Advisory Commission, which would include input from the city attorney, the rationale for the recommendation, public and/or agency feedback, an independent appraisal, related professional opinions and a history of the artwork itself.

The proposed policy also dictates that the artist or estate of the artist be notified of the opportunity to purchase or exchange the artwork. Next steps could include an exchange, sale at public auction, a private sale, donation or even destruction of the art. Proceeds from the sale of deaccessioned artwork would then be held exclusively for the purpose of acquiring or maintaining the city’s public art. Any actions recommended by the commission would still need to be approved by the city council.

A council vote is scheduled for Monday night on a resolution to adopt a city art deaccession policy.

Also during Thursday’s meeting, councilmembers held further discussions on creating a vision statement, which was a focus of their half-day work/study retreat in February. During that session, the council created a list of community values and a council subcommittee drafted a vision statement, which was presented Thursday night for additional feedback.

The statement now reads: “Mountlake Terrace is a dynamic, engaged, innovative and welcoming city with a vibrant Town Center providing jobs, services, entertainment and activities, surrounded by safe, connected and sustainable neighborhoods with a variety of housing choices for all, pride in their network of parks and recreation programs that support active lifestyles, and celebrate arts, culture and diversity.”

While council feedback was positive, councilmembers did offer some minor suggestions about wordsmithing and clarification. Mayor Pro Tem Doug McCardle, who is on the vision subcommittee, noted that once the council had a statement that they all liked and agreed upon, it could then be presented to the public for additional feedback.

After the vision statement is finalized, the subcommittee will then use it to help guide the drafting of long-term goals to be pursued consistent with that vision.

During the written public comments portion of Thursday night’s session, City Clerk Virginia Clough summarized an email recently received that had been signed by a group of seven residents. She said it expressed concerns with the ongoing Veterans Memorial Park Master Plan development, adding the group felt that such a plan should be “a visionary, forward-thinking document that will guide improvements to a park over the coming decades.” The group of signatories believe the work presented “to date misses the mark” and included a suggestion for reassessing that plan.

The city council’s April 5 meeting will begin at 7 p.m. See the agenda here.