After receiving more information on the pros and cons of approving a multifamily tax exemption (MFTE) program for development in the city’s Town Center area, the Mountlake Terrace City Council agreed at its July 18 business meeting to finalize details after additional discussions later in August.

Some councilmembers expressed a sense of urgency is approving the program, which under Washington State law allows developers of multifamily projects to apply for a property tax exemption for an eight-year or 12-year period. The goal is to incentivize development, but cities can also require as part of the program that developments offer housing units that are below market rates.

The July 18 meeting was aimed at answering questions raised by the council during a June 16 presentation from the Concord Group. The city contracted with the real estate advisory firm to assess various ways the city might incentivize the development of residential and commercial uses within the Town Center subarea, while also identifying ways to develop more affordable residential housing.

During his July 18 followup presentation to the council, Concord Group principal Adam Seidman said his latest report was focused on analyzing the MFTE from both the city’s and the developer’s perspective.

One point of discussion related to the MFTE program was whether it should include requirements to offer affordable housing units, which vary depending on what percentage of area median income (AMI) is used. Mountlake Terrace Mayor Kyoko Matsumo Wright explained that median income in the Seattle area is now $112,000. So requiring that 20% of units be rented at 70% of AMI, for example, would apply to those earning $78,400 annually. “How many people you know make that kind of money but still can’t find a place to rent?” Matsumoto Wright said, addressing what offering discounted rents would mean.

Monday night’s report included a chart showing rents of studio through five-bedroom apartments for various federal Housing and Urban Development median income levels under 30% to 80% AMI. Those were compared to newest rental project in the city, which also has the highest rents — Terrace Station. At 80% AMI, “which a lot of people refer to as workforce housing or the upper end of affordable housing,” Seidman said, the studio units at 80% AMI are fairly close to Terrace Station studio rents — about $80-$90 dollars more. However, that changes with apartment size. Three-bedroom units at Terrace Station, for example, rented for $800 a month more than the 80% AMI.

Seidman also reminded the council that he presented a survey in June of what other peer cities in the region were doing related to MFTE. Mountlake Terrace’s closest neighborrs —  Shoreline, Lynnwood and Kemore — are offering eight-year exemptions with no affordability requirements and 12-year examptions with affordability requirements that “ranged quite a bit in terms of the area median incomes they were targeting, ” Seidman said. Lynnwood, for example, targeted 115% AMI while Shoreline started at 50-70% of AMI for the 12-year exemption.

Seidman then presented the developer’s perspective of an MFTE program, through an analysis of potential developer return rates for a hypothetical 250-unit apartment building. This would be a podium project — one or two levels of concrete with wood on top, and five to seven stories — which is a typical mixed-use project seen in area. 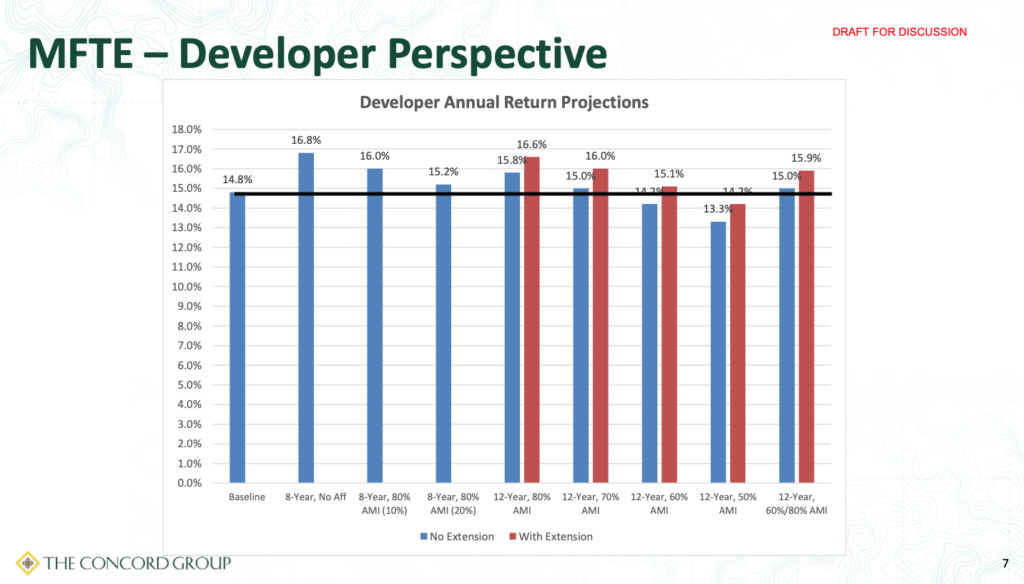 The Concord Group looked at 14 scenarios, including those MFTE projects that would include a state-allowed 12-year extension of the original 12-year tax exemption. The bottom line: An MFTE project can help boost developer returns by up to 2%, potentially making certain projects “pencil” when others would not.

An eight-year MFTE with no affordability requirement, offering 10% of units at 80% AMI, and a 12-year at 80% AMI (with the ability to apply for a 12-year extension) had the highest positive impacts to developer returns, he said.

The Concord Group recommended the city council consider adopting an MFTE with the following combination:

– Affordability requirements that run for the life of the exemption.

The Concord Group then looked at the MFTE projects from the city’s perspective, since “there is an impact to the city coffers from exempting property taxes,” he said.

The consultant researched a 30-year fiscal impact to the city from a hypothetical 250-unit rental development. It was modeled for the baseline scenario with no MTFE, an eight-year MFTE and a 12-year with or without a 12-year extension.

Positive impacts to the city from the project included property tax collected, sales tax from construction, permits and fees, sales tax from retail spending that occurs from new residents and utility taxes.

Negative impacts include the amount of property tax exempted and expenditures for additional police and fire services. With an MFTE, Seidman pointed out, the city is collecting fewer property taxes, so the tax loss on an eight- to a 12-year exemption is $1 million to $1.5 million. The 12-year with an extension is about a $4.5 million impact, he said.

However, it’s possible that without an MFTE, the project wouldn’t happen at all, especially given that neighboring cities are offering such exemptions and Mountlake Terrace is competing against them for projects.

Councilmembers spent quite a bit of time discussing the various options and the best approach to take based on the scenarios presented.

Mayor Pro Tem Bryan Wahl wondered if the city would be looking at an MFTE exemption for other parts of the city in addition to Town Center. Assistant City Manager Stephen Clifton replied that is likely to happen during the city’s 2023 Comprehensive Plan amendment process; however, he said, most developer interest is now focused on the Town Center.

Wahl then spoke to the urgency of moving forward with the program, adding the council wants to “see our Town Center flourish imminently,” since no apartment units have been permitted since the expiration of city’s former MFTE program. “We’re interested in kickstarting our development,” Wahl said.

Seidman replied that if the city’s goal is primarily to see development, it should focus on an eight-year, no-affordability requirement.

Wahl replied that while the city should prioritize affordability, he is worried that with inflationary pressures and a looming recession, “if we come in with something that doesn’t pencil, how many affordable units are we getting when zero units are getting built?”

“We need to spur development and get developers interested in the first place,” he said.

Seidman said he didn’t see the choice as “an either/or” option. As the Concord Group has recommended, the city can do both an eight-year exemption with no affordability requirment and a 12-year option with an 80% or 70% area median income (AMI), “or some type of combination,” he added.

Councilmember Erin Murray said she would potentially be interested in splitting the difference and offering a 75% AMI for 20% of units. “It’s where I would tend to lean given that seems to put returns at a place that makes it marketable while giving it the broadest option for income levels that seems feasible at this point in time,” Murray said, adding she is also on board with an eight-year exemption with no income requirements.

Councilmember Doug McCardle said he agreed with Wahl on the urgency and also supports both recommendations made by the consultant.

Councilmember Steve Woodard said he has “very little interest” in the eight-year, no-affordability requirement, and instead would like to see the city offer an eight-year option with 10% of units at 80% AMI.

Mayor Wright said she believes it is important to present a variety of options for developers to choose from so they can find a scenario that meets their needs. “Not every developer is going to be the same,” Wright said. “And it’s got to pencil or no one is going to do anything.”

After further discussion about how quickly the council could take a vote on the matter — and the need for public input on a final plan — the council agreed with City Manager Scott Hugill’s suggestion to have a study session later in August, when a decision matrix will be presented for their review.