The Mountlake Terrace City Council during its Thursday, Dec. 1 work/study session continued to discuss and suggest changes to the city’s draft 2023-24 biennial budget, in preparation for a public hearing and possible final adoption at its Monday, Dec. 5 business meeting.

The council also learned more about a staff proposal to amend city code regarding the undergrounding of utilities, which will also be the topic of a separate public hearing Dec. 5.

A main focus of the budget discussion was how to best provide funding for the city’s boards and commissions — a topic also raised during the council’s Nov. 17 meeting. The latest budget proposal presented Thursday by Assistant City Manager Stephen Clifton — based on feedback from the council Nov. 17 — included allocating $30,000, funded through federal American Rescue Plan Act dollars, to the city’s Diversity, Equity and Inclusion Commission (DEIC). Part of that funding would be used to contract with a consultant to help develop a strategic work plan for the commission.

Councilmembers then discussed whether it was better to have the funding for the boards and commissions be centralized, so the money could be pooled for various events that come up. That spending could then be overseen by the proposed special events coordinator — a new position for 2022-23 funded with ARPA dollars — who would assist with communications, planning, coordinating and implementing city/community events.

Councilmember Erin Murray said that while she supported the idea of having a pool of events and training dollars for the city’s boards and commissions, she believes it’s  important to continue funding for a DEIC strategic plan, separate from that pool.

“We created this commission, we kind of gave them some latitude but not a lot of direction and (not) a lot of support to solidify the work that they’re doing and our expectations around that,” Murray said. She also added that she views the DEIC as separate from the city’s other boards and commissions. “From my perspective, our DEI work should be something that ultimately touches all of the work that we do,” she said, “whether that’s as a council, as city employees, each of our boards and commissions. Ideally they would be doing work that impacts all of us.” Both Murray and Councilmember Steve Woodard said it was also important to identify a specific dollar amount for the strategic plan itself so there is enough funding available.

In addition, councilmembers suggested adding the $20,000 now allocated separately in the budget for the city’s Independence Day celebration to that event pool.

Clifton said that staff has recommended that the dollar amounts allocated to boards and commissions be reviewed during each two-year budget preparation cycle to ensure the funding is meeting the groups’ needs.

Members of the public can offer their thoughts on the 2022-23 budget during the public hearing Monday. You can review the budget at this link.

Regarding city code amendments for the undergrounding of utilities, Associate Planner Jonathan Morales explained that the proposed changes are intended to clarify requirements — including specific exemptions — for undergrounding of power and other utility lines in existing single-family dwellings in the Town Center as well as other city zones.

Morales explained the benefits of undergrounding utilities. Bringing utilities underground improves the aesthetics of city streetscapes and enhances public safety because it reducing reduces the prevlance of power outages and improves access for fire and emergency vehicles. The Mountlake Terrace City Council in 2010 approved an Underground Power Strategy as part of the 2012 Comprehensive Plan update process. This strategy called for the city to require undergounding from the nearest source when new utility lines or services are being installed.

According to Snohomish County PUD, the average cost for an existing single-family dwelling to go underground ranges from approximately $4,000 to $10,000. Most utilities are located overhead and there aren’t many places in Mountlake Terrace where they are underground, Morales said. A map he shared indicates that most underground circuits are located in the city’s Town Center area. 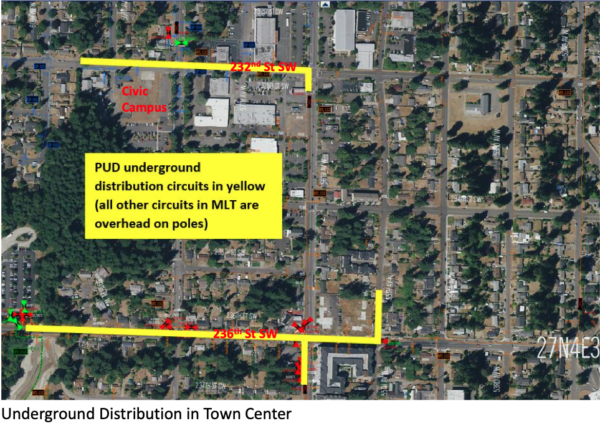 Under current city code, undergrounding is required in any city zone when new, replaced, relocated, upgraded and/or extended electrical service is provided to any property. The trigger for any property includes moving the electrical mast, which contains the wires that transfer power from the city’s overhead power distribution system to a home. “Currently you can do a full-house remodel as long as you are not moving that electrical mast,” Morales explained.

Undergrounding is also required for utility lines under 20,000 volts that are servicing a subdivision, planned unit development, commercial, and/or industrial development, he said. It also must be done during installation of telecommunication facilities and other franchise wireline, such as cable, and when other overhead wirelines are being undergrounded in the right-of-way.

Undergrounding isn’t required for extension of distribution lines when the nearest point of connection to a single-family property is overhead and the poles are greater than 100 feet from the property line or for utility lines over 20,000 volts.

Under the proposed code amendments, undergrounding utilities would be required in all Town Center zones, except in the case of life safety hazards. In all other city zones, undergrounding would be required in two instances: for new single-family residential developments or when the valuation for a substantial improvement to an existing single-family home is 50% or more of home’s assessed value, according to the Snohomish County Assessor’s Office.

Morales explained the assessed value threshhold this way: The City of Mountlake Terrace had an average housing sale price of $808,000 in February 2022, with the average assessed value at around $500,000. As an example, he used a property with an assessed value of $484,200 in which the housing structure was valued at $137,900, which is the number the city would use. If this house was moving, upgrading or replacing the electrical panel, while also doing a remodel with a total assessed value of more than $68,950.00 (50%), the proposed code would require undergrounding the electrical service, adding around 10% to the total cost of the project, he said.

Offering an exception for life safety hazards would permit Town Center homewners to upgrade their electrical panel without requiring utility undergrounding, Morales said. This is important because many Mountlake Terrace homes still have hazardous electrical panels that were manufactured by Zinsco and popular during the 1970s. The panels, known to increase the risk of electrical fires, were part of a major recall and lawsuit in 2002 and the company is no longer in business.

“So if a single-family dwelling is proposing to change out their Zinsco panel, for example, in Town Center, this would be an exception,” Morales said. This would also apply in all other zones “as long as the property is not doing a remodel and they just want to change their electrical panel,” he added. “This is something that wouldn’t require the undergrounding provision.”

“We understand that undergrounding can be cost-prohibitive for single-family homeowners; hence the exception we are proposing for life safety hazards and if they are under this (remodeling) threshold,” he said.

Community and Economic Development Director Christy Osborn noted that the city has received numerous complaints regarding its current undergrounding requirements, and the code amendments are aimed at addressing those. “We have a lot of situations…where we have life safety issues as far as current panels that we have in the city or people have situations where the panel is in a bad location,” Osborn said. “We want to make sure that people can make those code compliant for existing single-family residences and not make it cost-prohibitive for them to do that.

“This is to provide a little relief for existing single-family homeowners to not add additional cost when, for the most part, we just have a lot of life safety issues that we’re trying to address,” Osborn added.

Public comments on the undergrounding proposal will be taken during the Dec. 5 public hearing.