The Mountlake Terrace City Council at its Thursday, Nov. 17 work/study session heard a recommendation from staff to increase both the city’s general fund property tax and EMS (Emergency Medical Services) levies by 1% in 2023.

The council is scheduled to hold a public hearing and then vote on the proposal at its Monday, Nov. 21 business meeting. The 1% increase is the maximum allowed by state law. 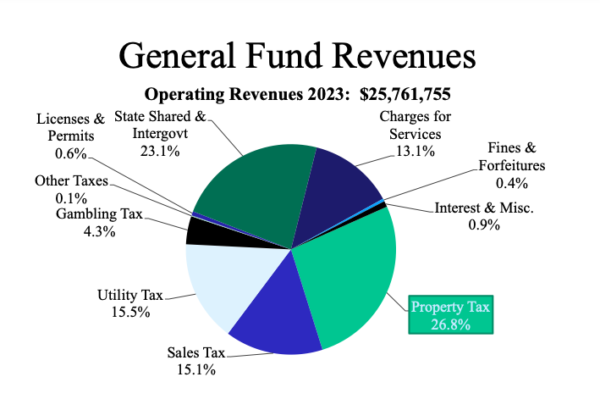 City Finance Director Janella Lewis explained that 62% of the revenue for the city’s general fund — which totals nearly $26 million — comes from taxes, with nearly 27% from property taxes. 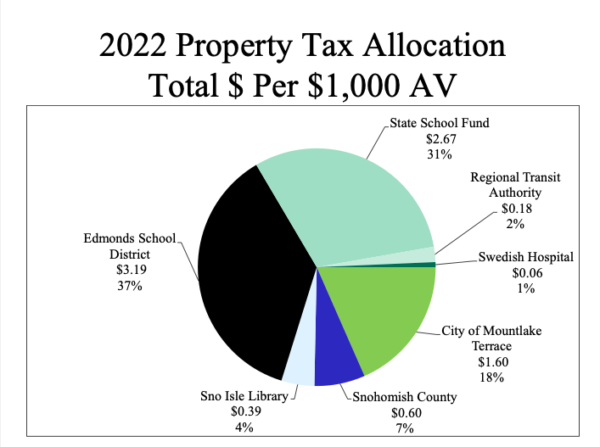 Seven different taxing districts collect property taxes from Mountlake Terrace residents, Lewis noted, with the city’s portion at about 18%. The largest chunk — at 37% — goes to the Edmonds School District, followed by the state school fund at 31%. 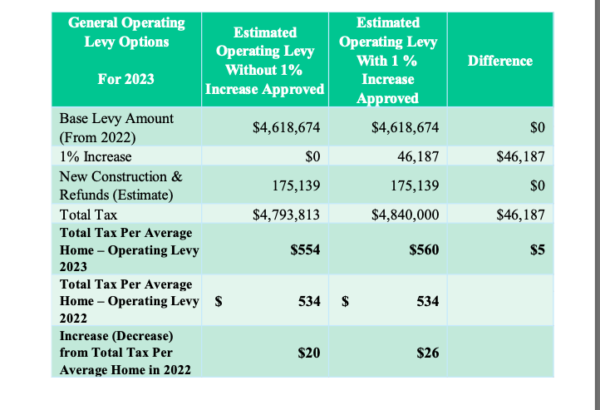 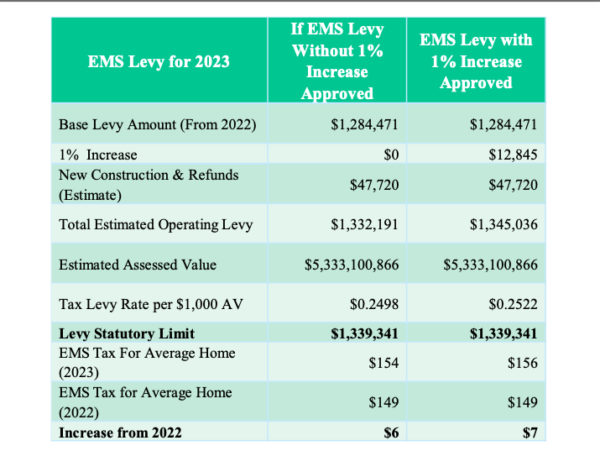 Assuming a 1% increase for both the operating and EMS levies, the total property taxes paid by the average Mountlake Terrace homeowner would increase by $33 in 2023. 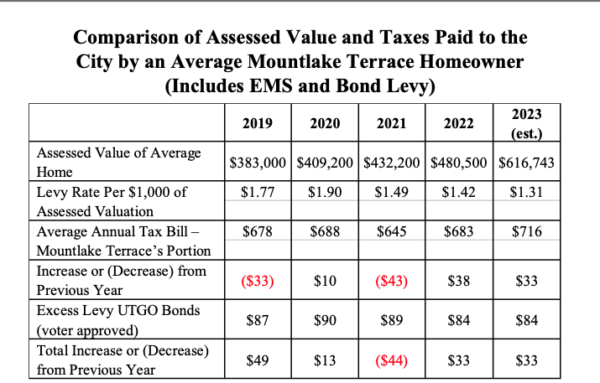 “Property tax rates in Washington use a complex math exercise to determine the rates,” she continued. “The county assessor’s office sets the rates based on the amounts levied by the tax districts.” 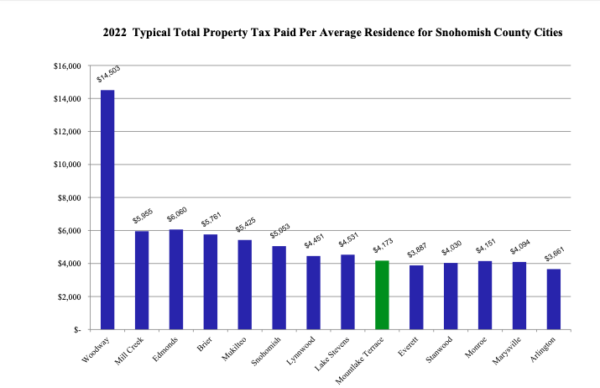 Lewis then shared a chart showing the 2022 typical total property tax paid per average resident for Snohomish County cities, which indicates that Mountlake Terrace — in green at $4,175 annually — is at the lower-middle end of the range.

Staff is recommending a 1% increase in both the general levy property tax and EMS levy, which is consistent with the city’s 2023 proposed budget and six-year financial forecast, Lewis said.

In other business Tuesday night, the council continued to discuss the city’s proposed 2023-24 biennial budget, which staff presented Nov. 7.

Assistant City Manager Stephen Clifton followed up on additional budget ideas the council raised last week, including hiring a consultant to present an economic conditions/market analysis. Such a study would include an post-pandemic review of the Town Center plan, demographics, employment and economic structure locally and regionally, and a look at broad national and regional trends in areas such as housing affordability, labor markets, and land use. The budgeted cost for such work would be $100,000 and would be covered by federal American Rescue Plan Act (ARPA) funds.

Another idea raised Thursday night was contracting with the Economic Alliance for Snohomish County to help the Mountlake Terrace Business Association make its transition to a chamber of commerce. Clifton said that EASC proposed hiring someone to work with smaller cities in the region — including Mountlake Terrace — in such an effort, with an estimated cost of $49,000 to the city. That would also be funded through ARPA, for both 2023 and 2024.

Councilmembers also talked at length about providing funding for all of the city’s boards and commissions. The current proposed budget includes $30,000 annually over the next two years — funded through ARPA — to contract with a consultant to assist the Diversity, Equity and Inclusion Commission with its work plan, events and meetings.

As a starting point for allocating funds, Councilmember Erin Murray suggested seeking the opinions of the boards and commissions themselves.

“I think it would be helpful to ask the commissions what resources they need,” Murray said. “If there were funding, what would they use funding for and what do they see as needs for their group?”

Mayor Pro Tem Bryan Wahl said he agrees it’s important to focus on the needs of the various boards and commissions. But he added he would prefer to have separate funding for developing work plans vs. the events that the various groups put on.

Councilmember Murray also reiterated the idea — raised by Councilmember Steve Woodard last week — about hiring a grant manager to offload some of the grant application work that now falls on city staff. Clifton replied that he can develop some numbers related to that request, adding that it may makes more sense to contract with a consultant to do that work rather than hiring a full-time employee.

Finally, the council heard a presentation from Finance Director Lewis about a set of proposed revisions to the city’s purchasing policies, which were last updated in September 2012.

“With the passage of time, inflation rates and current prices we have decided to update our policy to increase dollar thresholds to federal standards,” Lewis said. These include increasing the dollar amount of various purchasing procedures, and adding a purchasing code of ethics, controlling laws and monitoring compliance section to comply with federal regulations.

The council is scheduled to take action on that policy Monday night.

Also on Monday night’s council agenda is review and potential adoption of an ordinance that would allow police to issue a trespass notice to individuals who exhibit disruptive, abusive or criminal behavior while in city buildings or on city property. That measure originally came before the council Nov. 3, but Police Chief Pete Caw took it back to the city attorney for revisions based on council feedback.

You also can view livestreamed meetings and past recordings at www.youtube.com/cityofmlt.

You can see the complete Monday night agenda here.