The council met remotely via Zoom to comply with Gov. Jay Inslee’s stay-at-home orders due to the COVID-19 outbreak.

City Recreation and Parks Director Jeff Betz explained that the four grant applications were proposed after staff went through potential city projects to identify — based on council goals– those ideas that have the best chance of receiving funding.

There will be city matching requirements for all projects but no general fund dollars would be required, Betz said. Instead, the city would use impact fees and other park-related revenues for the city’s match.

The projects are as follows:

– An Aquatic Land Enhancement Account (ALEA) grant for Ballinger Park viewing platform and trails, including a mixture of asphalt, gravel and wood chip trails, plus fencing, gates and entry improvements. The project budget would be $925,000, with $500,000 in in grant money and $425,000 in city funds. “There is a ton of public support for this project,” Betz said

Ballinger Park’s proposed viewing platform and walking trails through an ALEA grant that will be matched with park impact fees. This viewing platform, as detailed in the Ballinger Park Master Plan, extends from the southwest shoreline of Ballinger Park out into the lake. This grant would fully fund the west side of the parks pathways, coinciding with the Army Corps of Engineers project to move Hall Creek, reconstruct the bridge crossing over the creek, and build a new boardwalk on the south end of the creek.

“There is a ton of public support for this project,” Betz said 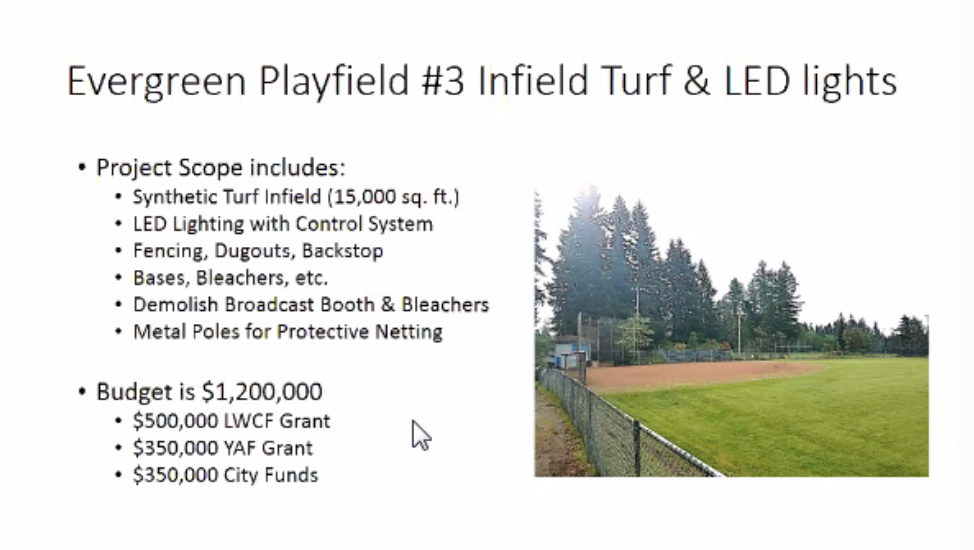 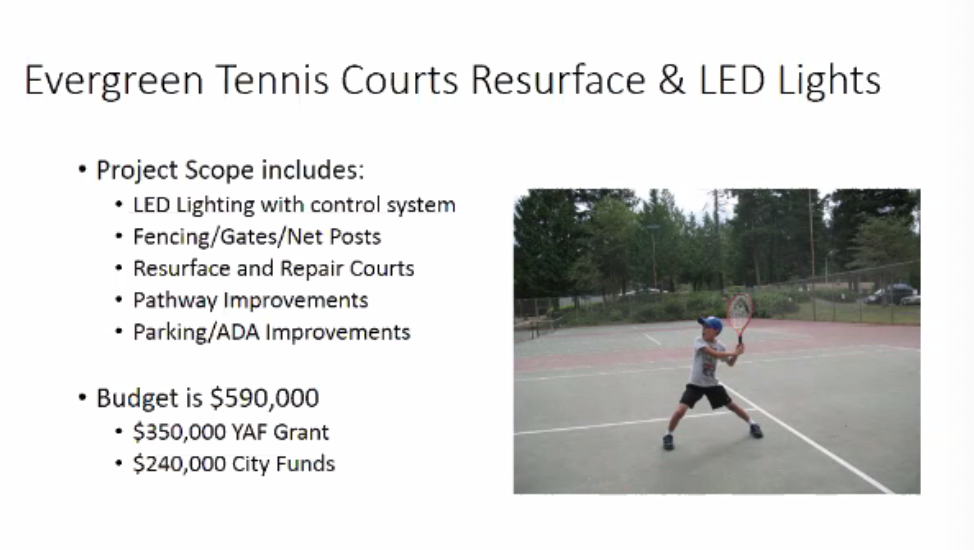 – A Youth Athletic Facilities fund grant for $350,000 to assist with restoring the Evergreen Playfield tennis courts, which includes the triple court and single court. The current tennis courts were built in the late 1970s and have not been resurfaced in a number of years due to the high cost. The proposed project would include repair and resurfacing of the courts, add new net posts and nets, replace the “skinned” fencing with black vinyl, new LED lighting, improved access to the courts from the parking lot and specific ADA improvements to the parking lot. This project total is approximately $600,000 and will be matched by wireless rental fees as well. 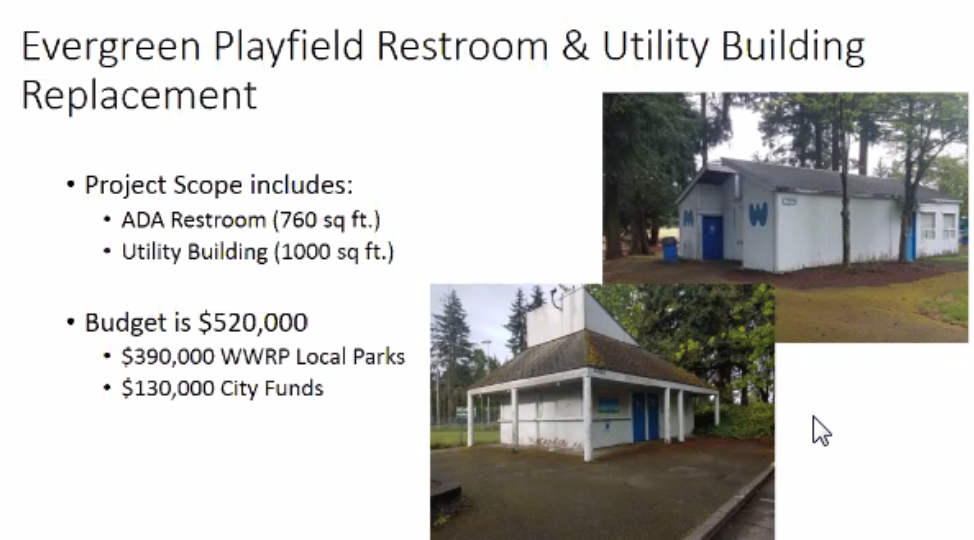 – A $390,000 Washington Wildlife Recreation Program Local Parks grant to replace the Evergreen Playfield Complex restrooms and utility building. The city is asking for almost $400,000 and will match with $130,000 in wireless fees for a project total of $530,000. The new proposed restroom will incorporate a new concessionaire space with men’s and women’s restrooms similar to the format currently in place. The plan calls for removing the current utility room/concessions facility located just to the south and replacing it with a new utility facility that allows for material storage and maintenance equipment storage.

In other action, the council approved:

– A $150,000 professional services agreement with SAFEbuilt, LLC for on-call plan review and inspection services. The contractor will be used for high permit volume to assist with additional permit review on complex structural plans. Funding will be provided through development fees.

– An interlocal agreement for a BikeLink grant with the City of Lynnwood — funded by the Verdant Health Commission — that will allow the city to be reimbursed for the cost of already-installed bike racks.

– Ratified City Manager Scott Hugill’s signing of an extended interlocal agreement with the City of Edmonds and the Ronald and Olympic View sewer districts regarding sewage treatment at the Edmonds wastewater treatment plant.