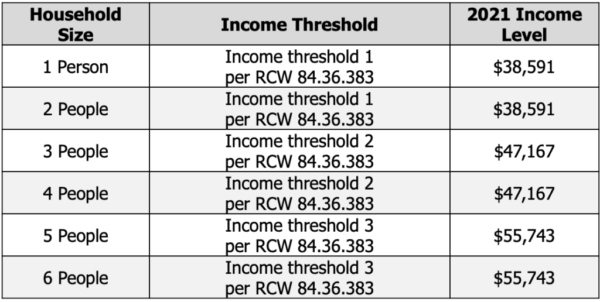 The Mountlake Terrace City Council at its Feb. 16 business meeting unanimously approved an amendment to the income thresholds used when providing municipal utility discounts for low-income senior and disabled residents. The council also held a public hearing about the proposed Willow Glenn Townhomes project and subdivision, which were subsequently approved.

Changes made to the income thresholds used to qualify for the utility discounts will now allow those guidelines to be more closely tied to the local area’s economy and reflect similar programs provided in neighboring cities and utility districts. Previously, Mountlake Terrace used federal poverty guidelines for the household income levels needed to qualify for the discount. City staff had recommended the council adopt the income levels used by the state in determining low-income property tax exemptions.

Property owners who are living on the property and either over the age of 62 or qualify as disabled are eligible for a 30% discount on water, sewer and stormwater charges. City staff anticipates that more households with senior and disabled residents will now be eligible to qualify for the discount. Last year there were 108 such households that received the reduction.

The possibility of change was first brought to the council’s attention last year, and during subsequent discussions some councilmembers have also expressed a desire to consider further adjustments that would allow all households with low-incomes to qualify for the utility discount, rather than just seniors and people with disabilities who are property owners.

During consideration of the proposed Willow Glenn Townhomes subdivision, Associate Planner Kevin Johnson provided an overview of the project and told councilmembers that it met city standards required to move forward. 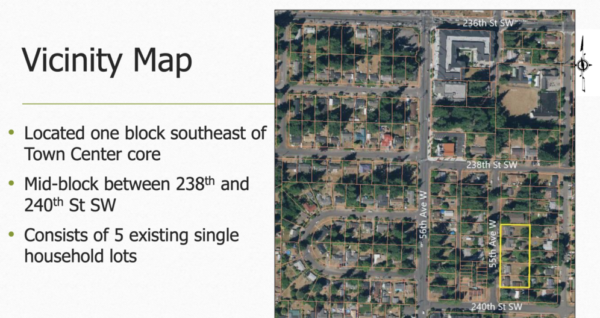 The plan calls for redeveloping five single-family residential lots, with a combined size of nearly one acre, that are located mid-block between 238th and 240th Street Southwest on 55th Avenue West. Existing homes and structures currently on those lots will be demolished, and the combined land then subdivided into 40 townhome lots for development across six buildings, with the same number of on-site parking spaces within garages. The project includes the construction of stormwater retention facilities and a required water main upgrade, landscaping, and associated pedestrian circulation and frontage improvements.

As part of the process, the project was required to provide a traffic impact analysis, which upon review showed that the level of service at nearby intersections would not drop below city-approved thresholds. Some councilmembers expressed concern that the townhomes and other development projects in the area might together worsen traffic conditions, dropping them below the minimum standards required, and inquired about the scope of the analysis conducted. 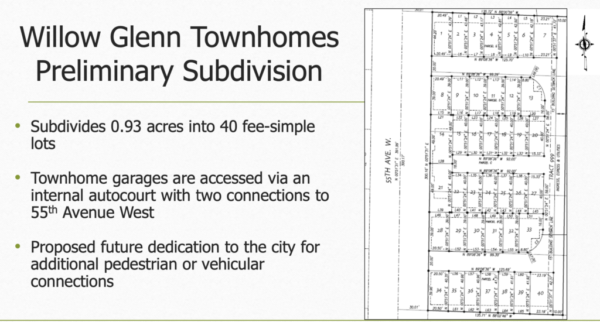 Traffic Engineer Marc Seferian said the data used not only reflected current standards throughout the city, but also “more importantly traffic growth rates in the Town Center area where this project is located.” By using both of these traffic counts, the consultant did not find any significant “traffic congestion or safety impacts in both the existing and future 2035 conditions,” he said.

Willow Glenn project applicant Duane Landsverk said before the council’s vote: “Staff has been such a joy to work with through all the challenges of the last year.” He thanked city department members by name for their feedback during the process. “It took a little extra effort to get here,” he said. “I think it’s going to be a nice successful project with a little bit smaller townhomes for a different variety of townhomes than we are currently under construction.”

During the public comments portion of the hearing, two residents spoke and one written comment had been previously provided to the council.

Stephen Barnes said he felt the Willow Glenn project was well presented and reviewed. “As a public citizen who’s interested in a proper expansion of downtown, I’m very pleased at this project and I think it does add to the diversity of new housing stock as we expand our downtown area,” he said.

Greg Farrar said he lives approximately a half-block away from the planned development and is concerned about the project’s density. Citing similar recently completed and still ongoing developments in the immediate area, he expressed worry that street parking will be negatively impacted by overflow parking from those residential units. Farrar also said that while sidewalks will be constructed in front of the developments, several houses on either side of those projects still lack them.  The result will be a patchwork of concrete requiring people who want or need to stay on the sidewalks for safety reasons to then “zig-zag” across the street in order to do so, he said.

Farrar said he felt the Willow Glenn proposal is too dense for the area and that in the future, “other developers will feel very free to also develop (to) that density.” He urged councilmembers to envision what may happen to the Town Center area in the next 30-40 years if similarly dense townhome developments come along and are approved.

After public comments were provided, Councilmember Laura Sonmore said that the application proposal being voted on relied solely on whether it meets the city’s codes and standards. “If somebody wants to make change into their city, it’s always good to look at their codes to see what’s going on,” she said. Sonmore also added that the Mountlake Terrace Planning Commission will this year be reviewing the impacts of parking, the tree canopy and affordable housing in the city.

In new business portion of Tuesday’s meeting, Mayor Pro Tem Doug McCardle said he would like both city staff and council to “continue to keep an eye on the traffic impacts that are happening throughout the whole city. While traffic impact studies are important, “numbers say one thing, but reality is another,” McCardle said. He also floated the idea of possibly requiring that a second such study be completed after housing developments are finished and occupied.

During his City Manager’s report, Scott Hugill informed the council that the City of Mountlake Terrace was recently again named a Tree City USA by the Arbor Day Foundation, in honor of its commitment to effective urban forest management.