Councilmember Rick Ryan was absent from the meeting and was excused.

Interim City Manager Andrew Neiditz, who is serving temporarily until a new city manager is hired, raised the pay issue during a discussion about the city manager recruitment process. Neiditz asked the council to review a document advertising the position so that the search – being conducted by GMP Consultants – can begin. The council needs to decide both the salary range and whether the city manager would be required to live in Mountlake Terrace, he explained.

The previous city manager’s salary was $165,000. Neiditz proposed an advertised salary range of $175,000 to $205,000 based on a survey of the recruitment market, nearby city manager salaries and the fact that some City of Mountlake Terrace department heads and senior staff make more than the current city manager salary. Neiditz said he believes the salary range would be flexible enough to attract the talent the council desires while also giving it flexibility.

Councilmember Laura Sonmore countered that those cities had larger populations and many of the city managers had years of experience. She accepted the salary range, but did not want to start at the top of the range during negotiations. Neiditz noted that those factors were accounted for and that the function of a range was to attract strong talent, since the city has many plans it wants to accomplish in the near future.

“Starting at $200,000 wouldn’t sit well with me.” Sonmore said as she made note of the costs associated with raises and other benefits over time.

“The salaries are just getting astronomical… and it just floors me where we’re going with the pay,” Sonmore added.

Councilmember Steve Woodard noted the need to weight what benefits are provided with a higher salary. Neiditz replied that the range of benefits is somewhat flexible and there is no standard for additional benefits.

Murray then proposed that the council raise the upper salary limit to $220,000 as it would attract more applicants. The council doesn’t need to offer at the top of the range but having a higher ceiling that brings in more applicants is beneficial, she said.

In other business, two representatives from the Economic Alliance of Snohomish County (EASC) presented to the council: CEO and President Garry Clark and Vice President of Economic Development Wendy Poischbeg. Clark began with a brief explanation of the organization’s function in stimulating and maintaining the local economies it serves.

The City of Mountlake Terrace is a member of EASC, as are many other local municipalities. 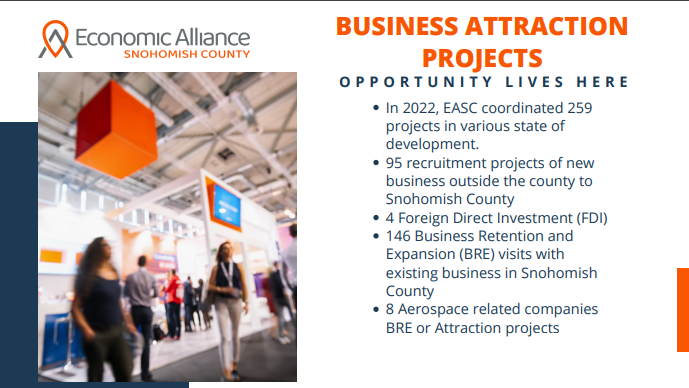 Clark stated that a major focus of the EASC going forward was business retention and expansion to ensure that Snohomish County businesses would be able to become self-sufficient. To that end, EASC staff will visit Mountlake Terrace regularly to assist with those efforts.

The Economic Alliance of Snohomish County has a chamber partnership initiative that emphasizes enhancing and adding to local business organizations. EASC offered assistance with development of the newly formed Mountlake Terrace and Brier Chamber of Commerce and intends to collaborate as the chamber grows.

During his city manager report, Neiditz also talked about the council’s need to  decide on whether the city is interested in pursuing possible annexation into the South Snohomish County Fire Authority. Sonmore, Woodard and McCardle have been serving on the committee researching this idea. Mcardle resigned last month and his last day on the council is Dec.19. However, Neiditz proposed that McCardle stay on the committee for a few more months, an idea that was accepted unanimously by the council. McCardle will receive a stipend for his work.

In other business, councilmembers reviewed several professional services contracts that will be voted on during the council’s Monday, Dec.19 business meeting:

— Zachor, Stock & Krepps, Inc., P.S has been providing prosecuting attorney services on behalf of the city since September 2022. The council reviewed a staff recommendation to renew the firm’s contract for 2023.

— The council also recommended approval of a composting materials plan ordinance that puts the city in compliance with House Bill 1799, enacted by the Washington State Legislature in March 2022, The bill requires cities and counties where compost collection services are provided at least 26 weeks a year to adopt such an ordinance which is intended to create a market to reintroduce the composted materials.

The city is mandated to create a plan to buy back organic materials, which are currently collected from residents through a contract with Waste Management, and then use them in city projects.

— The council also agreed with a staff recommendation for renewal of an interlocal agreement with the Snohomish Conservation District to provide environmental education. In 2022, the district hosted an event at Ballinger Park for children and their families to learn about environmental science. It also sponsored other informational events in classrooms, conducted creek basin planning and gave a workshop about the prevention of invasive plant species in Lake Ballinger.

The Snohomish Conservation District will continue to focus on public and youth education and event planning in 2023. Of particular note is “Trees for Terrace,” a tree-planting event in fall 2023.

Councilmember Matsumoto described the decision to continue supporting the conservation district’s work as a “no-brainer”.

— The council discussed a staff request to extend contracts with engineering services firms for 2023. According to staff, the need for those contracts are likely to decrease over time as the city hires more in-house engineers.

— The council heard a request from staff requesting a fee increase for the city’s public defender – Feldman and Lee – in 2023 from $13,905 per month to $18,000 monthly. Staff  said the 25.5% increase will address wage stagnation in recent years as well as address the rising number of cases the firm is handling.

There were no public comments during the meeting.