While the Washington State Department of Corrections has identified a property on the Mountlake Terrace-Edmonds border as a leading site to evaluate further for a new work release facility, a department spokesperson said that several steps remain before a final recommendation and decision will be made.

The department is in the early stages of finding locations considered underserved or unserved to expand its work release program, and the Mountlake Terrace site was one of several identified in Snohomish County, according to Washington State Department of Corrections Communications Director Jacque Coe. “The next step in the process requires a pre-application meeting between the property owner and the City of Mountlake Terrace,” Coe said in an email, adding that meeting has not yet taken place.

The recently identified possible site is a commercial property that formerly housed the Seabrook Dental Laboratory, located at 7125 224th St. S.W. in Mountlake Terrace. It’s situated along the Interurban Trail on a dead-end street, with vehicular access from 222nd Street Southwest in Edmonds near Ranch 99 Market.

In 2019, the Washington State Legislature directed the State Department of Corrections to identify sites for additional work release facilities in various regions statewide. That process, which was paused last year due to the COVID-19 pandemic, resumed earlier this year.

The legislature provided funding of $9.1 million in the 2019–2021 biennial budget to increase the state’s work/training release bed capacity by 200 beds in fiscal years 2020 and 2021. There are currently 12 work release facilities in the state, but none in Snohomish County. Other areas being considered for the expansion include King County, Pierce County and the north central counties region of Chelan, Douglas and Kittitas counties. 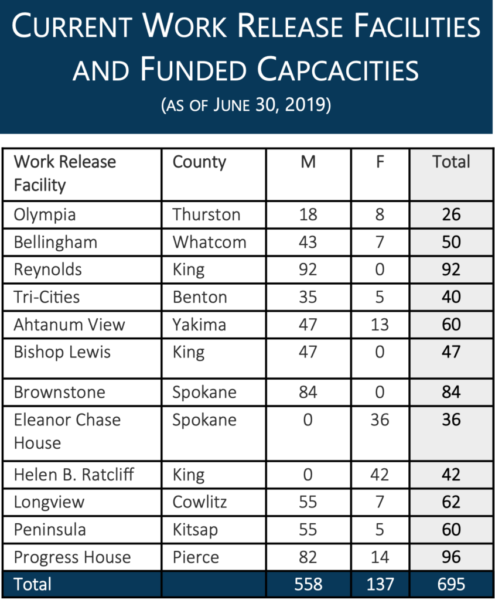 Coe said that following the initial statewide request for proposals (RFP) of potential locations, “There were no RFP responses from Snohomish County.” Since then, the department has participated with a local advisory committee in monthly virtual meetings to help identify potential sites for further evaluation. Advisory committee members include “community stakeholders, public officials and citizens from Snohomish County, including a representative from Mountlake Terrace city government,” Coe added. “We have also engaged the services of real estate brokers to identify a suitable and permissible site in Snohomish County.

State law requires cities to accommodate “essential public facilities,” such as work release facilities, and Mountlake Terrace allows this type of facility, with conditions, in the light industrial/office park zone.

So far, other potential Snohomish County location sites in Lynnwood, Everett and Marysville have all been dismissed based on their zoning.

“No other location evaluated in Snohomish County has met the program requirements and/or were located in permissible areas,” Coe said.

During the advisory committee’s May meeting, it was noted that a letter had been sent to all cities and towns in Snohomish County requesting assistance with other possible property sites to be considered for evaluation. The department’s goal is to ultimately have multiple properties to move forward for further assessment and consideration by the committee.

The state corrections department has said that no decisions regarding the local site have been made, stressing that the public process with the local advisory committee and stakeholder engagement will continue in the meantime.

Additionally, the committee still must review the costs of leasing the Mountlake Terrace site, which includes any improvements that would be required to renovate, repair, remodel or alter the site to make it suitable for a work release program

“The complete scope of required tenant improvements, which will drive the costs, has not yet been determined,” Coe said. “This will be informed by the discussions between the owner and the city. Any conditions placed upon the owner by the city in granting any conditional use permit will likely also be incorporated into the costs of entering a lease with the owner.”

If the site becomes a viable option, state law requires the Department of Corrections to conduct a public hearing process, which includes notification to all addresses within a half-mile radius of the site.

Coe said the department doesn’t currently have a firm timeline for when a final decision will be made on the location of a potential Snohomish County work release facility site. It also has yet to determine the resident capacity at any such facility’s location.

“Although the Mountlake Terrace site is under evaluation, we are still in the early stages of the siting process,” Coe said, adding the site must still undergo the pre-application review.

“In the event the site remains viable following that review and the owner agrees and still wants to proceed, conceptual designs will be created, costs will be estimated, and the department will provide (the) local advisory committee with that information as well as any additional information they may seek related to the site,” Coe said.

At that time, the committee would then be asked to formally review the site and make its recommendation on whether the Department of Corrections should proceed with locating a work release facility there, she added. 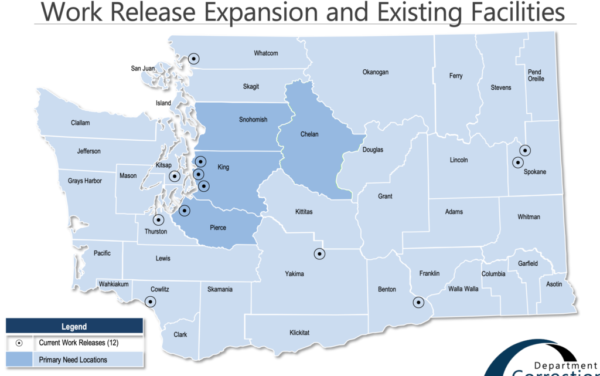 The Department of Corrections website notes that work release facilities “serve as a bridge between life in prison and life in the community,” assisting incarcerated people near their release date, and creating a smoother transition by establishing “a safe and productive lifestyle that can be sustained upon release.”

Participating inmates are given the opportunity to engage in paid employment or vocational training programs in the community while still remaining under the department’s supervision at a work release facility when they are not at their job or other such pre-approved activities.

Generally, individuals who are within six months of their earned release date may be eligible to spend those last months in a work release facility, but they are required to meet specific criteria. They must have a record of good behavior and be assigned a “Minimum 1” custody level. In addition, there must be available bed space at a work release facility.

Potential participants can be deemed ineligible due to misconduct, outstanding legal issues, prior failure or rules violations at work release, victim concerns, an excess or serious pattern of criminal history, and heinous or notorious crime(s).

People incarcerated at work release facilities must follow all program rules, the website states. These rules include searching for and/or retaining employment, which is monitored to ensure compliance, and agreeing to submit to frequent testing for substance abuse. Residents may only leave the facility for work or specific activities such as appointments, treatment, shopping or outings to visit family. These outings are required to be in the presence of an approved sponsor who has undergone a criminal background check and is deemed responsible for the resident’s actions.

In addition, residents must continue with any therapy, treatment, programming and classes identified in their reentry plan. Failure to abide by the rules may result in sanctions and/or termination from the program.

Participants generally stay in the work release facility for four to six months at the end of their sentence. They must pay a portion of their room and board costs. The work release program utilizes a three-phase program with a “step down” approach for residents to gain increasing privileges. Facilities develop and maintain a list of approved employers who have been oriented on work release rules related to employing participants.

According to the Department of Corrections website, “Incarcerated people who complete the work release program are more likely to be successful in maintaining employment, stable housing, and in paying legal financial obligations. Additionally, recent research conducted by the Washington State Institute for Public Policy (which conducts non-partisan research for the Legislature) indicates that work release programs have a positive cost/benefit impact; in fact, for every dollar spent, $3.82 is returned to the state.”

Because there are currently no work release facilities located in Snohomish County, Coe said, incarcerated people from the area “having served prison sentences and wanting to progress through this program opportunity and return to (their) residences in Snohomish County cannot currently do so.”

While several decision points remain in the siting process, “We understand the perceptions and concerns about the prospect of a work release facility in Mountlake Terrace,” Coe added. “The agency is committed to listening to concerns and working collaboratively with city officials, local residents and community stakeholders to identify and mitigate risks and community concerns to reach a shared mutual interest,” she said.

The identified location in Mountlake Terrace has several features that the department said would make for a good potential work release facility. “It is close to a robust network of public transportation as well as access to public services such as treatment, employment, educational, vocational/trades, shopping, and positive recreational opportunities for residents and their loved ones to access for approved social outings,” Coe said. “It can afford persons returning to communities in Snohomish County the ability to use this program as a smooth path to return to their families and communities in Snohomish county.”

If the Mountlake Terrace location is ultimately chosen to house a work release program, Coe estimated that it would take from nine months to a year after final approval before the facility “could be expected to be operational.”

In the meantime, the department will continue to hold its monthly local advisory committee meetings to inform interested parties and stakeholders about the status of the site.

Coe said a corrections official has been scheduled to present an overview of the program to the Mountlake Terrace City Council. She also added that the “outreach has been done to the City of Edmonds because of the proximity to their city limits, and an offer has been made to formally present information concerning the program and site,” to them as well.