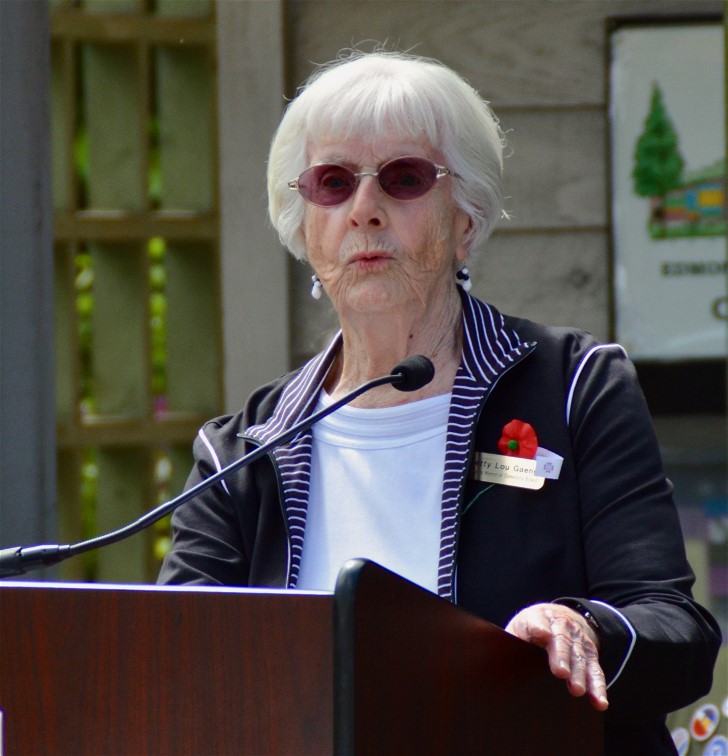 Publisher’s note: After 11 years in business, it’s time our readers got better acquainted with the people behind the names you see in our publications. Here. learn more about columnist Betty Lou Gaeng.

If you have ever read my Looking Back columns in My Edmonds News, Lynnwood Today or MLTnews, you already know a lot about me. My own memories are woven into many of the stories I have written about the people, the places and events of South Snohomish County. When I told the story of living through the Great Depression, the scary alligator bus of Edmonds, the roadhouses of a developing Highway 99, or the memorial monument dedicated the young men who lost their lives to war, my own personal remembrances were intertwined with actual facts.

At the age of 93, plus several months, I have been around for a very long time, with most of that time spent in either Edmonds or Lynnwood. Even though time and an unfortunate accident last year have taken their toll on my body, with effort, I still walk with my back straight, and without the help of either a cane or a walker—just a little slower. I consider myself as still mentally sharp, with a good memory, and I look at my white hair and wrinkles as well earned.

However, with this story, I guess I can be even more personal.  My birth name was Betty Lou Deebach.  I was born in Yakima, Washington in January of 1927, the daughter of Walt and Marie Deebach, longtime residents of Edmonds.  My parents’ last Edmonds’ home was at 610 Glen Street, and was one of the several Sears Craftsman houses built in Edmonds. In 1991, with some tears in my eyes, I stood and watched as our old family home was ripped apart to make way for more condos.

In the spring of 1933, we moved from a nice house in Seattle to what was the outlying area of Puget Mills’ Alderwood Manor. As a 6-year-old, with my parents and two older brothers, I found what it was like to live in a run-down house on a 10-acre chicken farm, surrounded by the ugly stumps and snags, left over from years of logging the land.

In the fall of 1933, I entered first grade at the red-brick Alderwood Manor Grade School on North Trunk Road West, now 196th Street.

Soon after I finished fourth grade, in late spring of 1937 — over 83 years ago — we moved to what is now called the Bowl of Edmonds, and in the fall of that year, I entered the fifth grade at Edmonds Grade School—when Frances Anderson was the principal. In fact, we lived just a couple of blocks from Miss Anderson and her friend and boarder Gwen Shakespeare, one of my favorite teachers. Our house, which we rented from the Brackett family, was at Fourth and Daley Streets, right across the street from Edmonds High School – at that time, the only high school in the entire school district.

The grade school building at 7th and Main became overcrowded, so in the seventh grade, our class ended up in an add-on section of the high school building. When I graduated from Edmonds High School in 1945, I had been in the same school building for six years. They didn’t even call the seventh and eighth grades junior high then, and mostly we were ignored by the more elite high school students.  We didn’t have any kind of ceremony when we completed eighth grade—we just entered high school when school opened the following September. Even so, I think we all felt that it was a welcome privilege and, certainly an accomplishment,

My four brothers and my sister also attended schools in the Edmonds School District, as did some cousins, nieces and nephews. In addition, my own four children attended Edmonds Elementary (former grade school), Edmonds Junior High, and all four graduated from Edmonds High at Holmes Corner. For a short time, even my great grandson was a student at Edmonds-Woodway High.

After high school, while still living at home in Edmonds with my parents, I worked in Seattle for several years. I married, became a housewife, and then a single mom in 1963; left alone to raise and support four children. I became a legal secretary for an old and prominent law firm in downtown Seattle; and advanced to legal assistant (actually in today’s world, a paralegal). My children and I lived on Glen Street in a townhouse apartment on the other side of the street from my parents. Conveniently, right behind what was by then Edmonds Junior High School.

I commuted by bus to my work in Seattle, often in the company of another longtime Edmonds lady, Grace Fisk. Grace worked for Metro (now King County Metro), and I worked for Metro’s attorneys. Grace lived directly across the street from me, and we both had an interest in genealogy, so we always had a lot to talk about.

In 1973, at the age of 46, I married again — a man from Alderwood Manor (Lynnwood) — and my life completely changed. My second husband, Fred Gaeng, was a boilermaker/boat builder.  We built two fishing boats for ourselves, and for several years, commercially fished in Southeast Alaskan waters, trolling for salmon. I learned to run a boat, to navigate, and in case of an emergency, to handle everything on my own. As a child I loved to read, especially adventure stories. For eight years, while at sea in the rough waters of Southeastern Alaska, I was able to experience some adventures of my own.

We retired, sold our boats, and then roamed around the country in an RV for a while. My husband’s health deteriorated and in late March of 2000, after his long and pain-filled struggle, my 77-year-old husband’s heart gave out, and I was left a widow.

By then, in my 70s, having raised four children and buried two husbands, I looked for something to do with whatever time was left for me. So, here I am, over 20 years later, still working at what I chose to do with the rest of my life. I became involved in volunteer activities, where my knowledge of the history of the people, events and places of Snohomish County were helpful.

I really don’t know what I am – a writer, a historian or a genealogist. I work at each and usually combine them. Seven years ago, Teresa Wippel asked for the name of someone who could write coherently and also knew about local history, my name came up, and here I am.

Even before I started first grade, I became a voracious reader and, in some way, or another, I have always done a lot of writing, even if it was just keeping the log books for our Alaska fishing years.  Maybe because both my grandfathers were newspaper men, writing is in my genes. As to history, I had a wonderful and inspirational history teacher in high school by the name of George Hatch—I have always remembered what I learned about history in his classroom.

In a seventh-grade class, I wrote a story for a school assignment. Of all the proposed subjects, I was assigned to tell a story about a dime. My 500-word tale about the life of a small coin (a dime) won a national award. I was often told that I had too vivid an imagination—sometimes, imagination is a big help.

Having actually known some of the pioneers of Edmonds, or the descendants of pioneers, has allowed me to write about local history with a personal touch. As a student, I had the chance to interview Amanda Yost, the widow of Edmonds pioneer businessman Allen Yost. I was born the same year that George Brackett died, but I had the opportunity to get to know his son, George Brackett II, because I was a childhood friend of a granddaughter of the founder of Edmonds. I knew Ray Cloud, the longtime editor of the Edmonds Tribune-Review and even Fred Fourtner, the rather eccentric and long-time mayor of Edmonds—and, of course, Frances Anderson, our Edmonds legend. Also, I knew many of the young men who had gone off to war during WWII and never came home—except in caskets.

I remember the days of the shingle mills on the Edmonds waterfront and the sounds of the whistles when the workers’ shifts changed. Also, the old fog horn that guided the ferry into the dock when the fog was too thick to see much of anything. I remember when we still had a few trains powered by steam. Also, not to be forgotten, I recall the hobo camp during the 1930’s Depression. It was located next to the train tracks, just north of the ferry dock.

I shopped at Safeway when it was located on the northeast corner of 5th and Main. Picked up our mail at the post office when it was just a few doors north of Safeway; bought a lot of my clothes at Durbin’s on Fifth, and my most favorite place to hangout was among the books at the Carnegie Library—where the Edmonds Historical Museum is today. As I said, my memories and local history intertwine, so it does give me an advantage when I look back.

Because of circumstances, a little over a year and a half ago, I became a full-time resident of Anchorage, Alaska, where I live with my youngest son and my daughter-in-law. However, my heart remains rooted in Edmonds and Lynnwood. I still write a Looking Back column now and then. I continue to keep up my membership in Lynnwood’s Sno-Isle Genealogical Society and Lynnwood-Alderwood Manor Heritage Association; and also, the Edmonds Historical Museum. Even though I can no longer serve as a voting member of the Edmonds Memorial Cemetery board, I am an honorary member, and meet with them via Zoom; all the way from Alaska to Edmonds.

To end this story of my life, I just have to mention my favorite Edmonds High School history teacher once more. In my 1945 EHS year book, George Hatch wrote “To Betty, a quiet and observant girl, don’t ever change.” I could never figure out if Mr. Hatch meant for me to always remain quiet, or observant, or maybe some of both. Also, I can’t help but wonder what he would think of me as a historian.