The City of Mountlake Terrace and the Snohomish Conservation District hosted an online discussion Thursday about local watersheds to gather residents’ ideas on which local creeks and lakes are most in need of improvement.

During the hour-long webinar, Stormwater Program Manager Laura Reed provided an overview on the status of the city’s watersheds, talked about fish use and passage in local creeks and Lake Ballinger, and also discussed other watershed-wide factors such as growth potential, water, quality, pollutants and the impacts of heavy traffic.

Participants were also polled on three questions that asked them to rank their top three choices among various criteria.

Reed explained that watersheds can be likened to a kitchen sink, “When you have a kitchen sink with two different basins, if you splash water around in one basin it’s going to go down the drain and if you splash water around in the other basin you’re going to have it go down the other one.” Then, she added,”substitute creeks for drains and you have kind of the basic idea of what a watershed is. If rain that falls on an area is not absorbed by the soil or by vegetation then it ends up in the creeks in Mountlake Terrace and ultimately in Lake Washington or Lake Ballinger.”

There are different scales of watersheds and among the major ones that drain into Puget Sound, Mountlake Terrace is part of the Cedar River – Lake Washington Watershed. Within the city and surrounding areas there are four watersheds or drainage basins that all eventually flow into Lake Washington, including the Scriber Creek, Lyon Creek, McAleer Creek and Hall Creek basins that provides two-thirds of the water flow into Lake Ballinger.

The terms watershed, drainage basin and catchment can generally be used interchangeably, Reed noted, but typically a watershed is much larger than a catchment,“which can be as small as a roof – it’s a surface that collects rain and delivers it somewhere else.”

The City of Mountlake Terrace is in the process of developing a required stormwater management action plan “to concentrate on looking at how we can improve water quality in a specific area of the city,” Reed said. The “catchment area that (the Washington State Department of) Ecology is defining is 400-600 acres, which if we were to look at McAleer basin or Hall Creek those areas within the city limits are about 600 acres. But if we were looking at Lyon Creek, we would probably try to look at a smaller catchment, which is this tributary on the westside of Lyon Creek Watershed that joins up with the east tributary and flows down through Lake Forest Park.”

She added that the city isn’t including the Scriber Creek basin as part of its process for determining how to best invest future repair money because only a small portion of the larger 25-square-mile Swamp Creek watershed basin, which it is a part of, is located within Mountlake Terrace. “So it’s unlikely that our actions are going to have a significant impact on this basin,” Reed said. Although she noted that the City of Mountlake Terrace along with all of the other municipalities and Snohomish County areas that fall into the Swamp Creek basin are already conducting ongoing stormwater management work to reduce the inputs of bacteria to it.

Under its federal National Pollutant Discharge Elimination System permit, the City of Mountlake Terrace must develop a plan using specific guidance from the Washington State Department of Ecology to improve water quality for one high-priority drainage catchment through stormwater facility retrofits and targeted stormwater actions.

“The watershed boundaries don’t equal the city or county boundaries,” Reed said, adding that Mountlake Terrace must not only develop the plan in order to maintain its stormwater permit with Washington state, “but also because it’s a good idea. It’s something we can do to really improve our quality of life here in Mountlake Terrace and keep the city a green and healthy place to live.”

Additionally, it can help to inform any changes made to long-range plans and land management strategies along with associated scheduling and budgetary needs. Development of the plan must be completed by March 31, 2023. It includes creating a comprehensive watershed inventory, gathering community input and prioritizations, selecting one high-priority catchment

“Right now I’m very interested in getting input from the community on what is the priority of these basins, what ones should we look at to invest more dollars to improve,” Reed said. “That process has to be completed by the end of next month and then we have a few more months to develop this stormwater management action plan for that particular catchment.”

Participants weighed in with their top three water quality pollutants of major concern in Mountlake Terrace. Among the choices, road-grit garnered the most votes, followed by fertilizers, toxics and construction runoff.

Creating the watershed inventory included factoring in various conditions including beneficial uses such as supporting aquatic life, recreation and surrounding wildlife habitat and buffer zones around the creeks and lakes; water quality, considering if there are overburdened communities of people whose health is disproportionately effected in ways that can be addressed through a stormwater management action plan, land use and zoning, and areas’ growth potential in the future.

During Thursday’s webinar, participants ranked swimming, fishing and water viewing as their top three local activities most critical to protect.

Regarding water quality problems, Reed said that she found among the “challenges we have to face in our current urbanized creek and lake environment: Essentially we have water temperatures that are too high in the creeks and Lake Ballinger during the peak of summer and early fall,” which is harmful to aquatic life and also promotes the growth of algae. A fragmented wildlife habitat from before restrictions required builders to leave a buffer zone or critical area at the edge of creeks. Bacteria from pet and also wildlife waste. A number of fish barriers that can prevent their passage both up- and downstream. And fish are also affected during summertime conditions in Lake Ballinger when there is less dissolved oxygen at various levels/strata of the water within the lake, which fish can’t survive in.

She noted the good news about the average pH levels for Mountlake Terrace water bodies is “we do have a pH that is not bad,” and it is within a range considered as “an area where fish are able to thrive and have no limitations on aquatic life.” Although, she added the trend appears to be that conditions are getting more acidic over time.

Reed highlighted that cities and counties throughout the area have put a significant amount of work into trying to remove various blockages that can prevent fish from passing up- and downstream. But there are still some that remain. 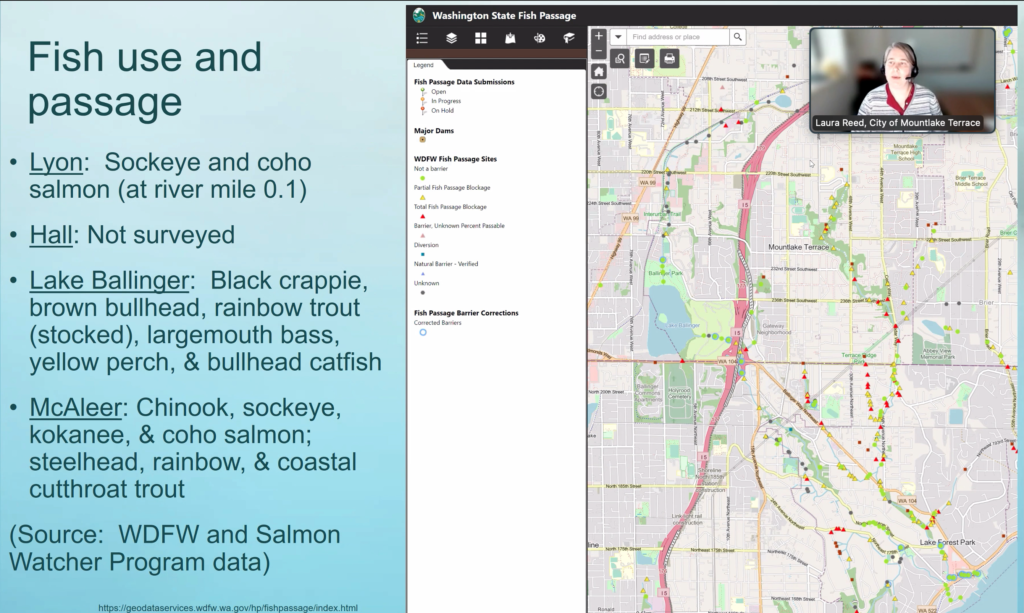 Among the local water inventory’s findings presented, the Hall Creek basin has the most amount of commercial and industrial land use along with the most exposure to heavy traffic. It also provides two-thirds of the water flow into Lake Ballinger, there are a number of fish barriers and “we also have fairly degraded water quality — typically because we have so much development in this location,” Reed said, along with harmful algae blooms in the lake.

McAleer Creek basin features mostly to medium levels of development intensity, it’s exposed to heavy traffic and most of its fish barriers have already been removed. The two remaining barriers will be removed by the Washington State Department of Transportation as part of its work around the I-5 corridor to replace culverts and make them passable for fish.

Finally, participants were polled on which of the three local water basins they would most like the City of Mountlake Terrace to prioritize for future stormwater investment. The Hall Creek basin that includes Lake Ballinger garnered the most support with nearly half of the votes from respondents.

Thursday’s presentation was recorded and can be viewed here. And the three survey questions are available here so that those in the community who were unable to attend will still have an opportunity to provide their input until the middle of next month.