During a review of the city’s 2021 fourth quarter financial report, the Mountlake Terrace City Council heard during its May 16 business meeting that city finances mostly remained on track with its budget.

Finance Director Crystil Wooldridge said a majority of revenues and expenditures were on target with the six-year financial forecast.

Gambling tax revenues, which totaled approximately $1.1 million, exceeded the revised annual budget projections but they still remained slightly below pre-pandemic levels. Meanwhile, revenues from fines and forfeitures were less than projected, accounting for 43% of the amount budgeted.

“Sales tax is still coming in healthy and strong,” Wooldridge noted. “Gambling tax revenues are starting to rebound from the pandemic and the closure to the card rooms.” She added that “development fees are still going strong.” Fines and forfeitures, meanwhile, are still below budget, she said, adding that “a lot of this had to do with prioritizing policing trying to limit contact with citizens so I would anticipate that going forward we might see an increase in this revenue source.”

Wooldridge also pointed out that after Mountlake Terrace City Hall opens and the city is once again able to start providing passport services, it’s expected that those will typically bring in approximately $35,000 annually.

The 2021 ending fund balance for the general fund was $11.5 million and approximately $7.3 million of that is unreserved.

“This is about $3.35 million above the revised budgeted ending fund balance,” Wooldridge said, “but just a reminder this amount includes the almost $3 million in ARPA (American Rescue Plan Act) funds that we received that are in our reserves that are awaiting council action on how to use those funds. So even though that looks like a big number, almost $3 million of it is ARPA funds that we have not identified a use for yet.”

The street operating fund that covers the maintenance of more than 60 miles of city streets and related infrastructure had revenues that were 83% of the 2021 budget, and expenditures totaled 68% of what had been anticipated. In addition, the general fund transferred $600,000 to the street operations fund that accounted for 58% of that fund’s total revenues received last year.

“You will see this theme throughout the fourth quarter,” Wooldridge told the council, “and from what I can see a lot of this has to do with inventory supplies, staffing – so the areas where we saw shortages in 2021 due to the pandemic. So we’re seeing where we are well below budget because as we all know things just kind of came to a standstill for a while and struggling to get, recruit or maintain staff and then also get the supplies and equipment and inventory that we need.”

The City of Mountlake Terrace’s recreation fund ended the year with a 49% cost recovery. “I know this number looks pretty harsh but just a reminder that we ended 2020 at 37%,” she said of the improvement. “We were at 81% in 2019, so we’re slowly seeing our programs picking back up and so I anticipate that this cost recovery will continue to increase and hopefully get us back to pre-pandemic percentages.”

The city’s general fund transferred $1.1 million to the recreation fund last year to maintain the programs it was able to provide and also for “overhead costs that are fixed that we need to maintain if we’re going to continue to have a recreation program,” Wooldridge reported.

She also highlighted that youth program revenues came in at 99% and aquatics revenues 102% of the 2021 revised budget, “So they (the Recreation and Parks Department) did a good job of anticipating what those revenue losses would be based off of where the programs were at and the limitations that they had on the number of students and people allowed within the facility.”

“We did see a delay in our capital projects for 2020 and 2021,” she added, “so you will start to see a bit of a reserve buildup but my understanding is that we plan on completing those projects over the next couple of years. So really you’re just seeing a delay in the use of that revenue due to a delay in being able to do these construction projects.”

The fund’s ending balance for last year had $3.1 million in reserve that is available for future capital projects and future debt payments. Wooldridge pointed out that the first water utility rate increase took effect in 2020 and since then the city has managed to build up those reserves over the past two years also in conjunction with the delay of construction projects.

Sewer service operating revenues were also greater than their expenses by nearly $2.2 million. And the ending fund balance had $2.7 million in reserve for future capital projects and debt servicing.

However, she noted that the sewer utility fund’s total expenditures exceeded total revenues during both of the past two years “and this is related to the Edmonds Wastewater Treatment Plant project that we are co-owner in. This is one of the projects that was already started pre-pandemic and so we’ve been paying our prorated share to Edmonds,” adding “which is why we went out and issued debt in 2020 to cover some of these costs.” 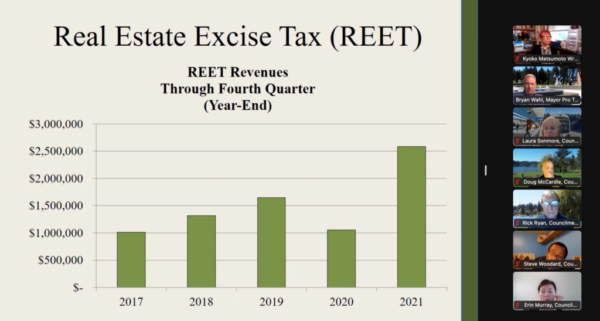 Wooldridge also highlighted that Real Estate Excise Tax (REET) revenues saw a significant influx in 2021 and exceeded $2.5 million. “We did end the year with a lot more REET revenue than we anticipated which can go to pay for our capital projects, so general fund capital projects, park projects, things of that nature,” she said. In December, the council had approved transferring more than $400,000 to the city’s fund for making capital improvement projects.

“We’re still on target to financially provide cost-effective services,” Wooldridge concluded. “We’re continuing to adhere to city council’s policy of paying for projects and services with our current revenue sources and we’re starting to see that we’re rebounding from the impacts of the pandemic but we will continue to monitor and update council as necessary.”

In other business, City Manager Scott Hugill informed the council that two planned projects will be delayed due to supply chain issues related to the COVID-19 pandemic. The Westside Water Main Project has been suspended and as a result also the 66th Avenue West Pavement Reconstruction Project.

“The plan had been to replace that water main under 66th (Avenue) in that area and then go forward with reconstructing the road,” Hugill said. “But we don’t want to reconstruct it and then tear it up and replace the water main after that so we’ve cancelled those bids,” and “suspended the Westside Water Main Project until about November when the contractor is expected to be able to get the supplies needed for that work and then we will rebid 66th. This should not cost us any additional dollars to suspend” the water main project while it “is in hiatus at this time.”