Thursday’s presentation was provided by The Concord Group and focused on those programs authorized under Washington state law that incentivize development by allowing developers of multifamily projects to apply for a property tax exemption for an eight-year or 12-year period. The exemption is only on the residential improvements value or portion of a project.

Many communities throughout the region have used Multifamily Residential Property Tax Exemption (MFTE) programs as a way to help them meet state and local goals of encouraging residential opportunities in urban centers with insufficient housing, while at the same time, incentivizing the development of housing units that are at a greater level of affordability such as those below market rates.

In 2011, the city council approved designating certain areas such as the Town Center, freeway/tourist area, and area north of 216th Street Southwest as residential target areas. It established an exemption from real property taxation for the development of multifamily housing in those designated target areas. A three-year continuation of the “property tax abatement program for qualified multifamily residential development” was approved in 2014, however, the program has since expired in October 2017.

The current council’s goal of having “housing choices for all income levels” calls for, among other things, creating a list of possible development incentives that may encourage a diversity of housing types. Those development incentives include exploring the merits of the city reinstating its multifamily property tax exemption program.

As a result, the city contracted with The Concord Group to assess various ways the city might incentivize the development of residential and commercial uses within the Town Center subarea, while also identifying ways to develop more affordable residential housing.

Adam Seidman, who is principal of the real estate advisory firm, told the council that municipalities across the state provide a range of incentives to encourage residential development that are traditionally tied to a specific objective of the city such as increasing affordable housing, increasing the range and types of housing options and LEED certified green-friendly construction.

Under state law, cities that meet certain qualifications can offer an eight-year, 12-year or 20-year property tax exemption that applies only to the value of eligible, new multifamily housing improvements. It excludes the value of land along with any previously existing and non-residential improvements.

The exemptions have varying baseline requirements that are set by the state, which can be further iterated upon by the municipality administering the program.

The City of Mountlake Terrace’s previous MFTE program provided an eight-year exemption with no affordability requirements. Under that program, four projects with nearly 1,000 total units were developed or are still under development before the exemption expired in October 2017. Those projects include Arbor Village that built 123 rental units, Vineyard Park that constructed 104 senior rental units, Atlas 236 that provided 151 rental units and Terrace Station that will have approximately 636 total units when its three phases are all fully constructed. 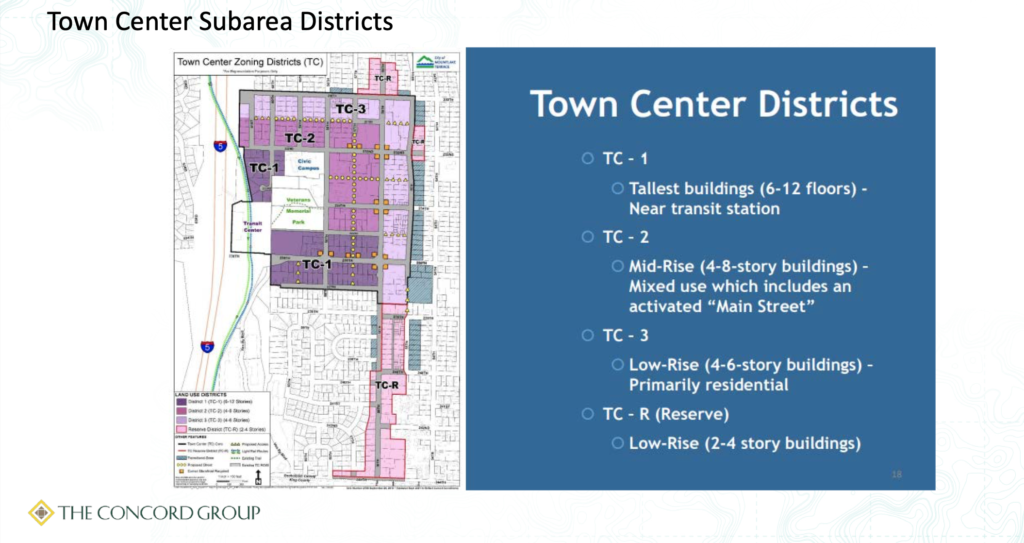 A survey of nine “peer cities” in the Puget Sound area determined that the most common usages of the MFTE exemption are for eight- and 12-year exemptions. Half of the eight cities that offer  an 8-year exemption don’t include an affordable housing requirement on the option. Four of the peer cities offering MFTE exemptions have instituted lengthened affordability requirements, beyond the state baseline, that mandate the affordable units in buildings must remain affordable for the “life of the project.”

Statewide, cities with an MFTE program have seen accelerated growth and development activity.

Seidman explained that the exemption programs can help spur development by reducing the property tax, which then results in an increase to net operating income for developers and can therefore make building such projects more financially feasible and attractive to them. He noted that the primary determination for when builders can make a potential development “pencil” is the relationship between cost of land, achievable rents and allowable density. 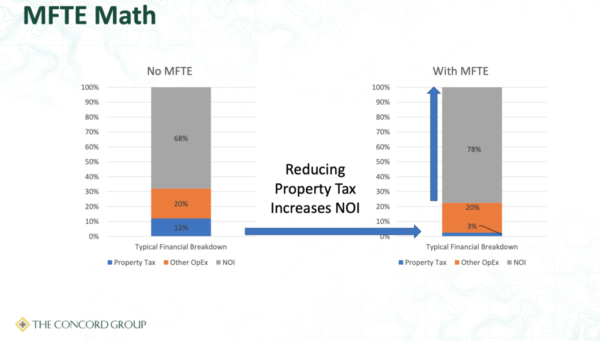 As a result, offering developers an MFTE program can help make certain projects happen that wouldn’t necessarily otherwise get their approval or the required financing. Seidman noted that a significant portion of the value of the exemption program gets priced into the costs of development as higher land costs.

He recommended that the City of Mountlake Terrace develop clear priorities, goals and desired outcomes that will then help determine which potential incentives are most appropriate for the Town Center subarea. For example, if overall housing production is a priority, then incentives that help potential developments “pencil” will be the most appropriate. Whereas, if affordable housing is a priority, then providing a variety of paired incentives and potentially requirements will be critical.

“Based on our findings, we recommend that the city adopt or readopt the MFTE program for the Town Center subarea specifically,” Seidman said, “because that was our focus area – we didn’t really look at it across the city as a whole.” He added that doing so will likely “help to encourage overall housing production and density close to the future light rail station. We do recommend tying it to an affordable housing requirement,” possibly below 80% of the area’s median income, although its specific range “needs further investigation.”

Seidman said doing so ties into two of the council’s stated goals including “housing choices for all income levels” and “a vibrant Town Center and economic vitality that provides jobs, services and activities.”

He added the City of Mountlake Terrace should also consider potentially offering other incentives, that would be secondary to the MFTE, including height bonuses and parking reductions for the outer areas that would be tied to affordable housing requirements and/or the development of below-grade parking. And also fee waivers or reductions that could also be combined with the MFTE and possibly other incentives “to help encourage affordable housing beyond that already incentivized.”

Seidman also suggested that the city conduct a financial impact study for several different types of exemption and incentive scenarios based on its priority goals.

Several councilmembers expressed an interest in exploring eight- and 12-year exemption programs with various types of incentives – especially for affordable housing. Some on the council noted they were hesitant about utilizing reduced parking incentives.

City staff gathered input from the council, which will engage in further discussions, likely during its June 30 work/study session, about potentially developing and adopting an MFTE program.

During a review of the Mountlake Terrace Police Department’s 2022 first quarter report, Chief Pete Caw said that several types of crimes and incidents had risen. “The first quarter of 2022 has seen a significant increase in crime involving firearms and some property crimes,” he noted, “particularly auto thefts and catalytic converter thefts.”

He added “that is not unique to the City of Mountlake Terrace it’s a regional problem” and “all city agencies have seen a significant rise in these particular crimes.” 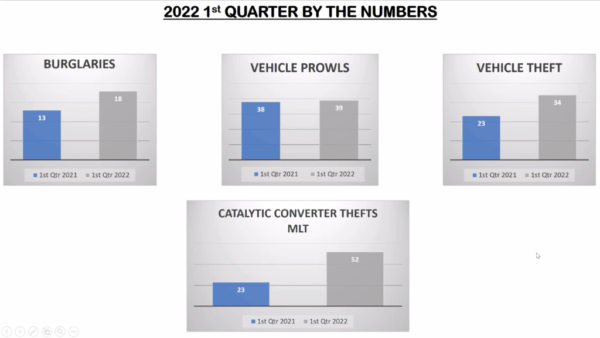 Caw said that he felt recent state legislation aimed at roughly decriminalizing narcotics has been a factor. “It was a grand experiment but I can tell you from my perspective it’s been an abysmal failure,” he added. “It’s resulted in an increase of a lot of property crimes, a lot of violent crimes,” and “it’s been a significant factor in increases in crime.”

Overdose deaths have also “increased dramatically in the area,” he noted. “I don’t have percentages for you but anecdotally I can tell you that it’s a higher incident of overdose deaths than I’ve seen in 35 years.” He said the increase is “probably directly attributed to the advent of fentanyl and the decriminalization of narcotics in the area.” In addition, he also stated feeling that the Washington State Supreme Court’s ruling in State vs Blake, which determined the statute for “simple possession” of a controlled substance was unconstitutional and void, has also been a factor. 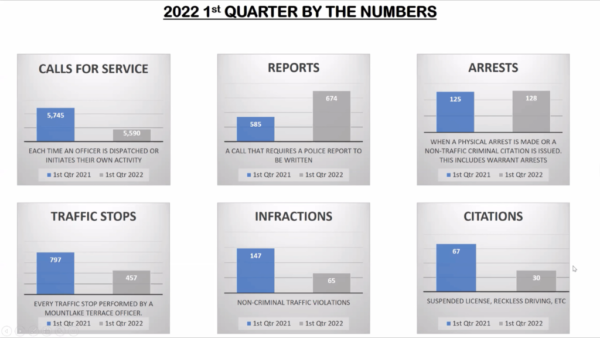 “Burglaries and vehicle prowl offenses remained similar to 2021,” he added. “Vehicle thefts and catalytic converters are two categories where we’ve seen a significant increase in numbers unfortunately.” Haynes said the rate at which vehicles are stolen in the state has doubled in the last year and “catalytic converter thefts in Washington have risen 10,000% in the last couple of years alone.”

During the first quarter, the number of gun related crimes in Mountlake Terrace increased as there were nine such offenses police responded to, which continued an upward trend over the past year. Several of the recent incidents also included “ghost guns,” which are firearms that don’t have a serial number. 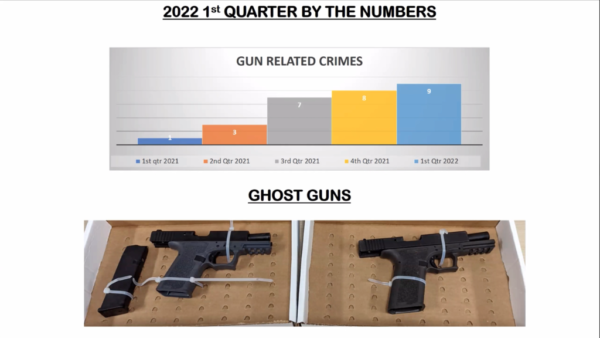 And there were no complaints received about biased-based policing.

Police commanders told the council that changes to state legislation is likely needed in order to address the rise in catalytic converter thefts and also “ghost guns.” 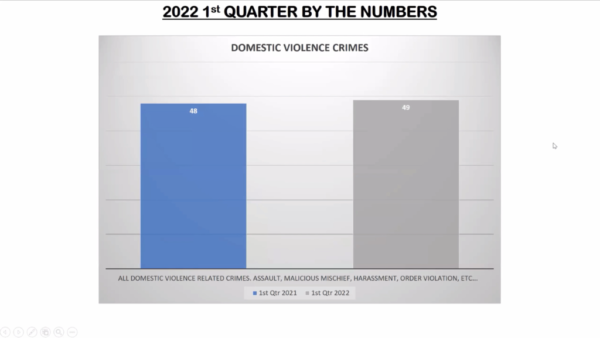 Approval of the appointments was scheduled for Thursday due to the council’s June 21 regular business meeting cancellation and the board/commission terms beginning on July 1.

Hannah Meier and William Paige were both reappointed and Vonita Francisco was a new appointment to the Mountlake Terrace Diversity, Equity and Inclusion Commission.

Keith Edholm and Audrey Meyer were both reappointed and Austin Horner was a new appointment to the Mountlake Terrace Recreation and Park Advisory Commission.

The city council’s regular business meeting scheduled for June 21 was previously cancelled. As a result, the council will next meet during its Thursday, June 30 work/study session at 7 p.m.