The City of Mountlake Terrace is moving closer to having a multifamily tax exemption (MFTE) program for development in the city’s Town Center area.

During its Thursday, Aug. 11 work/study session, the Mountlake Terrace City Council provided staff with direction for the particulars to include in a resolution that it will consider for approval later this fall. Before that happens, city staff has to send a letter to other taxing districts (for example, the state, county and school district) informing them of the program under consideration. The council also must formally adopt a resolution designating the residential targeted area where the MFTE program will be used — in this case, the Town Center — with that action planned for its Sept. 1 meeting. Finally, the council must hold a public hearing on the resolution prior to final approval.

Under the state-approved MFTE program, developers of multifamily projects can apply for a property tax exemption for an eight-year or 12-year period. The goal is to incentivize development, but cities can also require as part of the program that developments offer housing units that are below market rates.

The city hired the Concord Group, a real estate advisory firm, to assess various ways the city might apply the MFTE program for residential and commercial uses within the Town Center subarea, while also identifying ways to develop more affordable residential housing. The council held two previous meetings on the topic: the July 18 meeting was aimed at answering questions raised by the council during a June 16 Concord Group presentation.

On Thursday night, a majority of councilmembers agreed with Concord Group recommendations that the city offer two MFTE programs: An eight-year program with no affordability requirement and a 12-year program offering 20% of units at 80% or greater of area median income (AMI) , which in the Seattle area is $112,000. The council also agreed that the affordability requirement should apply uniformly to the range of rental units offered — for example, studios and one-, two- and three-bedroom apartments — rather than allowing the developer to decide which units should be discounted.

Speaking in favor of having the city dictate the mix of housing that would be discounted, Councilmember Steve Woodard said that if left to the developer to decide, it’s likely the lower-priced units would be limited to smaller studio apartments, which excludes those residents with families. “We want to make sure that that’s equitable across the board. If you need a three-bedroom, you should be able to access it at 80%,” Woodard said.

Councilmembers in past meetings have expressed a desire to reinstate the MFTE program to encourage Town Center development, noting that no apartment units have been permitted since the expiration of city’s former MFTE program.

To offset the cost of administering the program, staff is recommending a base application fee for developers of $5,000 plus an annual fee of $2,000 for monitoring the affordable housing requirements, Assistant City Manager Stephen Clifton noted.

In other business Thursday night, the council heard — as they do every six months — reports on performance measures from five areas of the city — recreation, parks and property management; public works and fleet managment; community and economic development; organizational development and information services; and community relations. These measures cover January-June 2022.

“The pool is back,” Recreation and Parks Director Jeff Betz said in beginning his report. While the pool was open during most of the COVID-19 pandemic, “programming is starting to pick up again,” Betz said. “This summer has been extremely busy.”

While revenue and expense figures aren’t yet available for January-June of 2022, Betz said that preliminary cost recovery numbers for this year are “way better than the last two years.” That means the program won’t require as much of a subsidy from the city’s general fund, as has been the case during the pandemic.

While the numbers also show that swim capacity has increased, that number is somewhat misleading because it doesn’t reflect the fact the city is offering a reduced number of swim lessons due to lack of staff. including lifeguards, swim instructors and front desk personnel. The pool is only open for a half day on Saturdays and closed on Sundays. “So that’s really kind of dragging down our numbers,” Betz said. Because of limited weekend pool hours, pool rentals and room rentals for birthday parties and related activities are down as well. “Those are huge budget holes for us,” Betz added.

For the first time since the pandemic, the city was able to hold a Craze summer swim league, Betz said, and all of the city’s summer camps “were maxed out.”

As for parks property management, Superintendent Ken Courtmanch noted that there was a slight drop in the percentage of daily litter and garbage remal, restroom cleaning and inspections during the first half of 2022, something he attributed to losing a staff member at the end of 2021, who wasn’t replaced until June.

Courtmanch also said that the city has seen an increase in park volunteer hours, with 744 reported from January to June 2022, compared to 586 hours in January-June 2021.

Councilmember Erin Murray asked about trash collection in the parks, in particular relating to the city’s recent policy of removing trash receptacles in some areas and encouraging residents to pack out their own garbage — and wondered if that policy should be reassessed. Courtmanch replied that staff can do that, but added that in some of the city’s smaller parks, such as Firefighters Park, the idea of people carrying out their own trash makes sense. In other larger areas, such as the Ballinger Park boat launch, the city has found it is better to have a few centrally located trash collection spots rather than smaller ones spread throughout the park, he said.

You can see the complete recreation and parks presentation here. 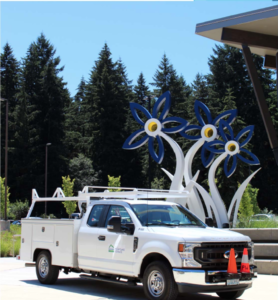 Supply chain issues were highlighted by Public Works Director Eric LaFrance in his January-June 2022 report. He shared a photo of a new truck the city purchased, then noted that it was one of only two trucks available in all of Western Washington. “We no longer have the ability to order trucks from the state contract,” LaFrance said. In fact, he added, the state won’t be accepting orders until this fall, to be fulfilled in fall 2023.

When it comes to equipment, the city anticipated supply chain problems so “we’ve ordered replaceent parts ahead of time so we have more stock than normal,” LaFrance explained.”You just can’t go…and grab something off the shelf anymore.”

You can see the complete public works presentation here.

In sharing her January-June 2022 metrics with the council, Community and Economic Development Director Christy Osborn said she’s particularly proud of her department’s efforts to reduce the number of days it takes to get a building permit.

Osborn said this performance can be attributed to Building Official Matthew Gisle, whom she described as “the best building official I’ve ever worked with in 32 years.” Gisle has been working without a building inspector for more than a year, and yet the city continues to reduce the average number of days from building permit application to decision — now at 38.5 days (it was 87 days in 2021).

The city’s cost recovery has continued to be high — at 184% in the first half of 2022, it’s way above the department’s target of 85% — due to the large volume of development occuring in the city, she said.

Osborn also shared numbers related to long-range and economic vitality, noting that the citywide property valuation for the first half of 2022 is now at $4,154.9 billion, up from $3.827.6 billion in 2021 — an increase of more than 9%.

You can see the complete community and economic development presentation here.

City Manager Scott Hugill reported on the activities of the human resources department, noting that the city has been busy recruiting and hiring new employees, with 15 new positions filled in January-June 2022. 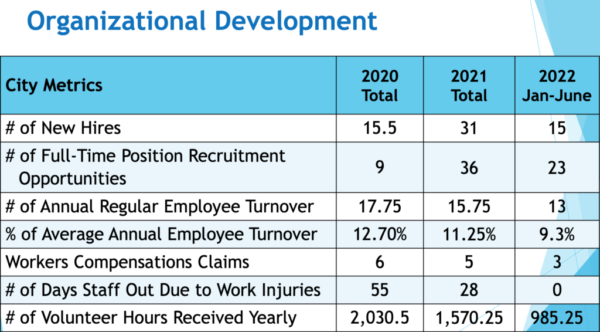 Regarding employee turnover, 13 employees left in the past six months, with 10 of those resigning, Hugill said. “10 resignations is what really stands out to me,” Hugill said. “We typically don’t have that level of turnover. They are not just taking jobs in neighboring jurisdictions; they are moving to Minnesota and Alaska and changing their whole lifestyles even before they have jobs.”

Councilmember Woodard addressed the 10 employee resignations, asking if the city did exit interviews to determine why workers are leaving. Hugill replied that while that exit interview information is confidential, he offered to prepare a report for the council providing a broad overview of the reasons those employees left.

You can see the complete organizational development presentation here. 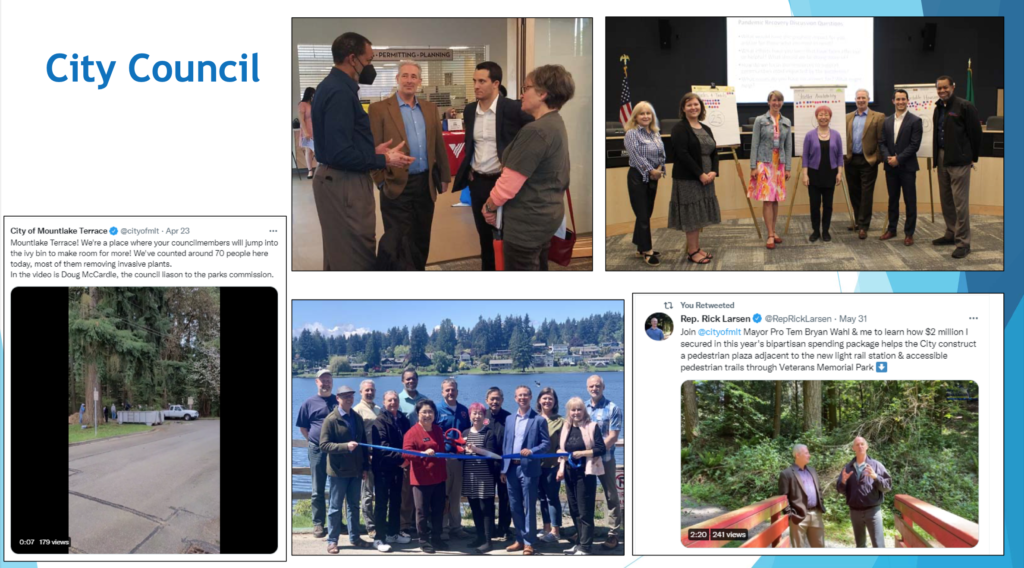 Clough showed photos of the varied community engagement activities — from ribbon cuttings to park cleanups — that the city has been involved with, along with all the ways the city has publicized its efforts through a range of social media, including Facebook, Instagram and Twitter, along with press releases.

Community relations is also responsible for providing a range of information resources for residents, including the City Happenings newsletter and its website.

Clifton discussed the city’s marketing and outreach efforts, in particular its advertising through 425 Magazine and the Puget Sound Business Journal aimed at publicizing development opportunities in Mountlake Terrace. 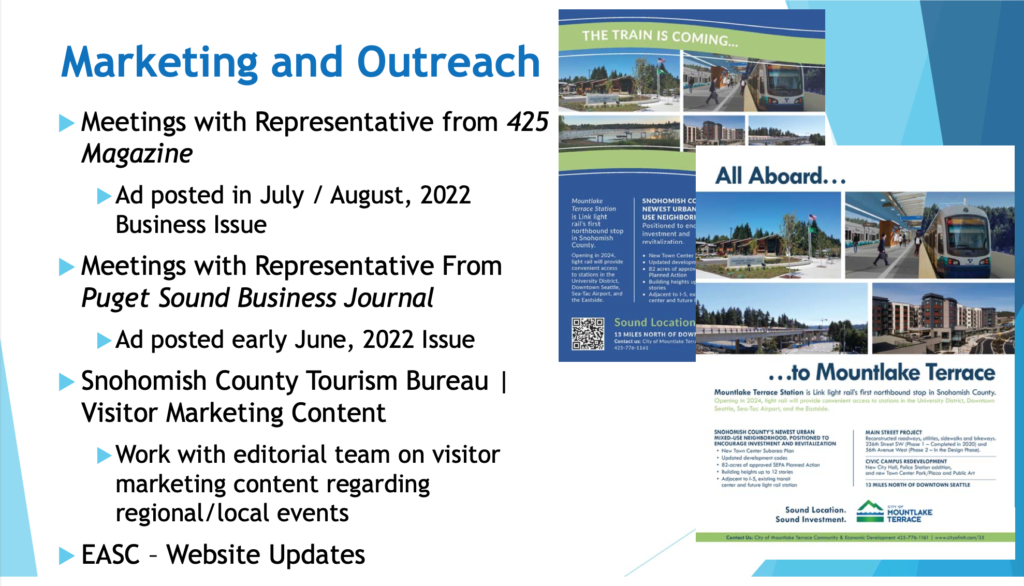 “Christy (Osborn) and I have had conversations with representatives from New York…and we have talked with developers from Texas, the Bay Area. There are people who are looking at Mountlake Terrace, looking to invest,” Clifton said. “I think the climate just has to be right and I think we’re getting there. I wouldn’t be surprised within the near term that we see a lot of activity…especially as we get closer to light rail coming online.”

You can view the complete city manager, council and community relations presentation here.

The city council’s next meeting will be a hybrid business meeting at 7 p.m. Monday, Aug. 15 at Mountlake Terrace City Hall, 23204 58th Ave. W. Among the items on the agenda are honoring the Smith Family and their efforts to put on Tour de Terrace, review and adoption of the Snohomish County Comprehensive Solid and Hazardous Waste Plan and discussion of options for use of the city’s share of American Rescue Plan Act (ARPA) pandemic recovery funds.

You can see the complete Aug. 15 agenda here.