The Mountlake Terrace City Council during its Monday, May 17 business meeting held two public hearings on potential changes to zoning codes. Councilmembers approved modifying the standards to allow for carports, covered porches and patios citywide while also creating regulations around mobile food vendors and their locations. Separately, after hearing comments and having discussion, the council temporarily paused the public hearing on an applicant’s request to make alterations to Town Center Subarea Plan zoning language. The proposal would remove the restriction on locating medical/health care uses on the ground floor of certain designated corner storefronts.

Under the approved modifications, all single- and multi-household residential zoning districts will now be permitted to have carports as accessory buildings, with a requirement that storage uses within the structures be enclosed and not visible from the right-of-way or adjoining properties. That language was included — based on Mountlake Terrace Planning Commission discussions — to help make sure that the structures are used for their stated purpose of storing vehicles and don’t become de facto open storage areas that could become an eyesore if used to stockpile a multitude of other items.

The change was recommended by the commission and city staff to help provide equity across neighborhoods throughout Mountlake Terrace, because previously carports were allowed in some residential zones but not others. It does not allow tent structures to be used for vehicles or storage.

Covered porches and patios are now permitted with limits on those structures height relative to the type of roof. The code requires they not be fully enclosed above 36 inches in height and allows for them to encroach within 6 feet of a front-yard setback.

The measure also addresses the fact that Mountlake Terrace did not previously have a permitting and regulations process specific to governing mobile food vendors who want to set up at various locations throughout the city. The approved language allows food vendors to operate on a temporary basis while at a specific location and for a limited period of time. It sets limits on their hours and times of operation, requires they obtain all necessary city business license, health and fire district approvals, provide for daily waste collection and removal, and meet specific permit requirements for locating within the public right-of-way or on city-owned properties.

Those temporary-use permits are valid for 12 months and such approval is required even when those activities are located on private property. Mobile food vendors are not allowed to sell alcoholic beverages or cannabis-related products. A special events permit is required to allow for more than one food truck/vendor on a property and also for a truck located in residential zones.

Vendors can be parked once a day for up to six hours on a site and their hours of operation can occur no earlier than 6 a.m. and no later than 9 p.m. Trucks can be parked at a location no more than four days a week and overnight parking or storage of the food truck and/or vendor’s equipment would not be allowed.

The motion to approve those changes carried by a vote of 6-1, with Councilmember Erin Murray dissenting from the majority.

After that vote, councilmembers then discussed and unanimously decided to table the public hearing on potential changes to specifically designated corner storefronts in the Town Center area, which had been proposed by an applicant. 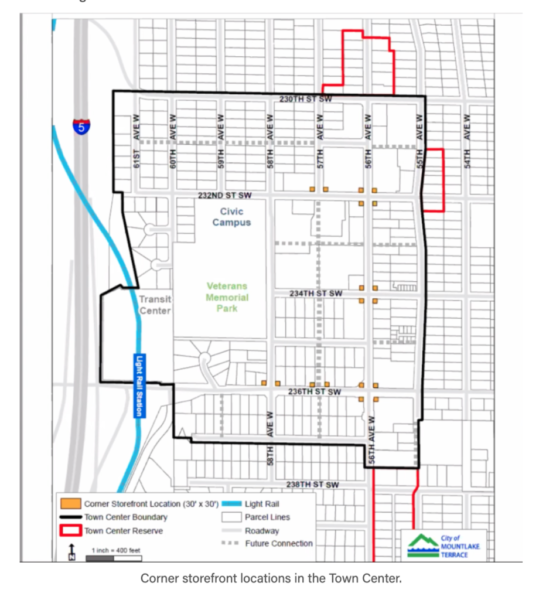 There are some limited boundaries for select uses, and the zoning restriction currently applies to six corner storefront intersection locations. A total of 18 corners are subject to the limitation, since those intersections have either two or four corners affected by designation. The plan is very specific about what uses are not allowed at specific designated corners, while allowing those uses along other portions of the ground floor in buildings.

Yuko Abe, president of AFCO & Sons Properties, which owns the Atlas 236 building, submitted an application to change the code text concerning those Town Center Zoning Districts. The proposed amendment would remove the restriction on locating medical/health care uses on the ground floor of designated frontages and corners. It would expand the allowed location of those services to include the first 30 feet immediately at the corner of the designated intersections in the TC-1, TC-2, and TC-3 Zones.

Abe’s application is seeking the change to allow for the Richmond Pediatrics clinic to relocate from Shoreline to the Atlas 236 building at the designated corner storefront of 56th Avenue West and 236th Street Southwest. However, any text amendments proposed in the city are required to be evaluated for their implications across the entire zoning designation so as not to be deemed arbitrary and capricious to one specific instance.

City staff — along with the Mountlake Terrace Planning Commission by a split vote of 4-2 with one abstention — have recommended the proposed text amendment be denied because it is not consistent with the Town Center Subarea Plan and is contrary to its intent at key intersections. The intention of that specific language in the plan’s 2019 update, which included public input, was for those select corner storefront-designated locations to function as activated pedestrian spaces with high-turnover, visible uses such as retail, restaurants and personal services like salons.

Those selected corners were identified as potentially being the most vibrant and active shopping and dining areas within the city and likely to remain active on evenings and weekends. Restricted uses such as medical/health care, day care operations and financial institutions at these corner locations might typically be open for less hours of operation and activate less pedestrian traffic during such times. Those restricted uses are allowed in the Town Center area, just not on designated corners.

Several people associated with either the pediatric clinic or the Atlas 236 building provided comments during the public hearing in support of the proposed text amendment. They stated that the Richmond Pediatrics would be a good addition to the community and would also bring additional foot traffic and economic activity to the area from patients before and/or after their appointments.

“We have searched long and hard over two years to find the right place (to relocate) and we have found it in Atlas 236,” the clinic’s Dr. Jeffrey Ernst said. He noted that during that search, none of the other potential locations clinic officials looked at in Mountlake Terrace were able to fit the clinic’s needs and he also didn’t feel that a remodel of the building’s other spaces would work for them. “So why this space? Because its perfect for us, other spaces have been less perfect,” he said. If the clinic isn’t able to relocate to that specific spot, it likely wouldn’t move to the city due to its own time constraints, Ernst added.

According to Ernst, the entrance area on the corner would be the clinic’s lobby and would have an open visible feel, without use of frosted glass or opaque treatments. He promised the clinic would “provide vibrancy through many hours of the day” into the early evenings and on weekends, and would be a benefit to the community.

During discussions, several councilmembers said they felt that the 2019 Town Center update’s 18-month planning process had been deliberate and strategic, and had also included public input. Councilmembers suggested that the plan shouldn’t necessarily be amended now since it had only recently taken effect and that more time should be allowed for it to achieve the desired results.

Some on the council wondered if the pandemic and its subsequent impact on restaurants, retail and similar types of businesses — along with the commercial real estate market — should be a reason for the city council to consider the proposed changes. Those councilmembers also asked if this change could possibly be a way of adapting to a new economic development situation that was unforeseen at the time and therefore not previously contemplated during the plan’s 2019 update process.

Another issue raised: If the council were to approve language changes specifically for this type of medical use at those locations, then what would the implications be for the bigger picture in the Town Center area?

Ultimately, councilmembers all agreed to continue the public hearing at its next regular business meeting on June 7. They felt this would provide more time to allow for a greater understanding of the issue’s complexities moving forward and further exploration of other potential options. They also encouraged city staff and the applicant to continue ongoing discussions seeking a possible common solution under the current code’s language.

In other business, the council approved awarding a construction contract for almost $1.1 million to McClure and Sons, Inc. for work planned at the Ballinger Park waterfront. The waterfront project includes the construction of a new boat launch at the current location and a new adjacent floating boat dock, which will be located where the fishing pier is now. A new fishing pier will be installed just to the north and also existing tire rip-rap along the shoreline will be replaced with native plantings and erosion-control techniques.

Construction is expected to begin this summer, with in-water work commencing in the fish window time period of July 1-Aug. 31, 2021.

City Manager Scott Hugill reported that masks are still being required at city facilities while the city awaits further guidance from state and county health officials. Staff is continuing to meet with Tour de Terrace organizers about holding the event at the end of July. Even assuming that Snohomish County will continue to remain in Phase 3 under the Healthy Washington: Roadmap to Recovery reopening plan, the event wouldn’t have a parade, car show or fireworks due to the logistics and measures needed under health guidelines.

The council approved several items on its consent calendar previously discussed including:

-Entering into a contract with Aktivov for asset management computer software used to track infrastructure maintenance.

-Adopting an amendment ordinance to extend the effective date of the new City Hall address by one month until June 30.

The full agenda of items discussed at Monday night’s meeting along with any related materials and/or attachments can be viewed here.