A new playground will be coming to Matt Hirvela/Bicentennial Park after the Mountlake Terrace City Council unanimously approved, at its June 6 regular business meeting, the equipment’s purchase and installation. The new play area will be located in the southwest corner of the park near the gazebo structure and installation is anticipated to begin this fall.

The nearly 2,300-square-foot play space is designed to primarily serve children ages 5-12 and will have an engineered wood chip surface surrounded by a concrete playground border. It will feature an inclusive playground with components that include a curved balance beam, Pod Climber, WhooshWinder slide, Zenith net climber, Wobble Pod Bouncer, LolliLadder, Marble Panel and corkscrew climber along with other items to play on. In addition, four swings the city previously purchased will be installed adjacent to the new playground.

The $110,000 purchase will replace the park’s aging existing playground and includes a contract with Playcreation, Inc. to provide and install the new play equipment. In 2020, Snohomish County awarded the City of Mountlake Terrace $50,000 in funds to replace the existing playground as called for in the park’s master plan. The remainder of the project will be funded from the city’s capital improvement fund. 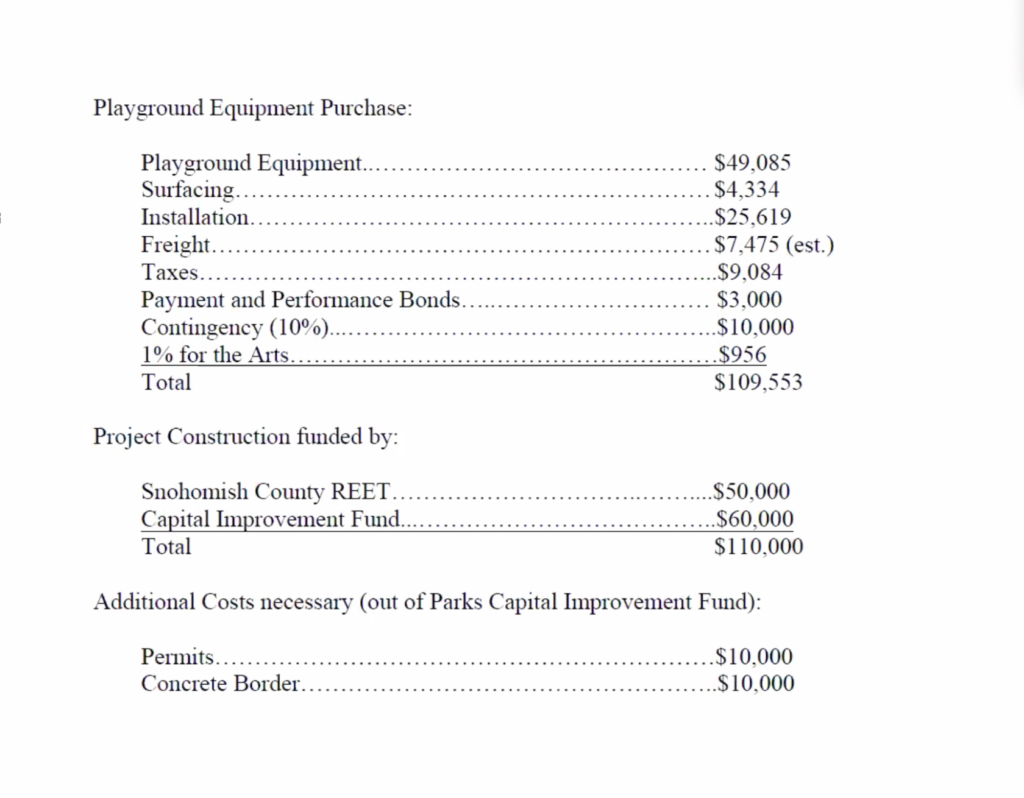 City staff gathered input from the Mountlake Terrace Recreation and Parks Advisory Commission (RPAC) along with the Neighborhood Park Improvement Subcommittee (NPIS) for the playground’s location, design and the ages of children it would primarily serve. Using their feedback, three final designs were ultimately selected from the 14 different proposals submitted by playground companies.

The public was then surveyed about the three final concepts selected. The playground design approved Monday night received the most support — earning 155 of the 354 total votes cast.

Following the public input, staff further researched the different playground options’ maintenance and installation. They determined that the option chosen will be easier to maintain and provides a playground that is more spread out, has more variety of play features and also offers increased safety for children due to visibility.

Recreation and Parks Director Jeff Betz told the council that the play area will satisfy all requirements under the Americans with Disabilities Act (ADA) by providing an accessible play surface of wood play chips and transfer stations. He added that while the wood chips can be difficult to navigate at times for people with a wheelchair or stroller, a fully accessible playground that utilized a poured rubber surface was not financially feasible as the costs generally exceed $250,000 for a playground of this size.

As a result, Betz said the city included plans for a concrete pathway surrounding the playground “to help people get to the playground and transition into the wood chips.” A universally accessible playground will be installed later this year at Ballinger Park and will feature the first poured rubber surface in Mountlake Terrace.

Councilmembers said they liked the playground design chosen. Councilmember Erin Murray added that despite the cost limitations, she also appreciated the city had considered the various inclusivity aspects when developing the project’s plan. 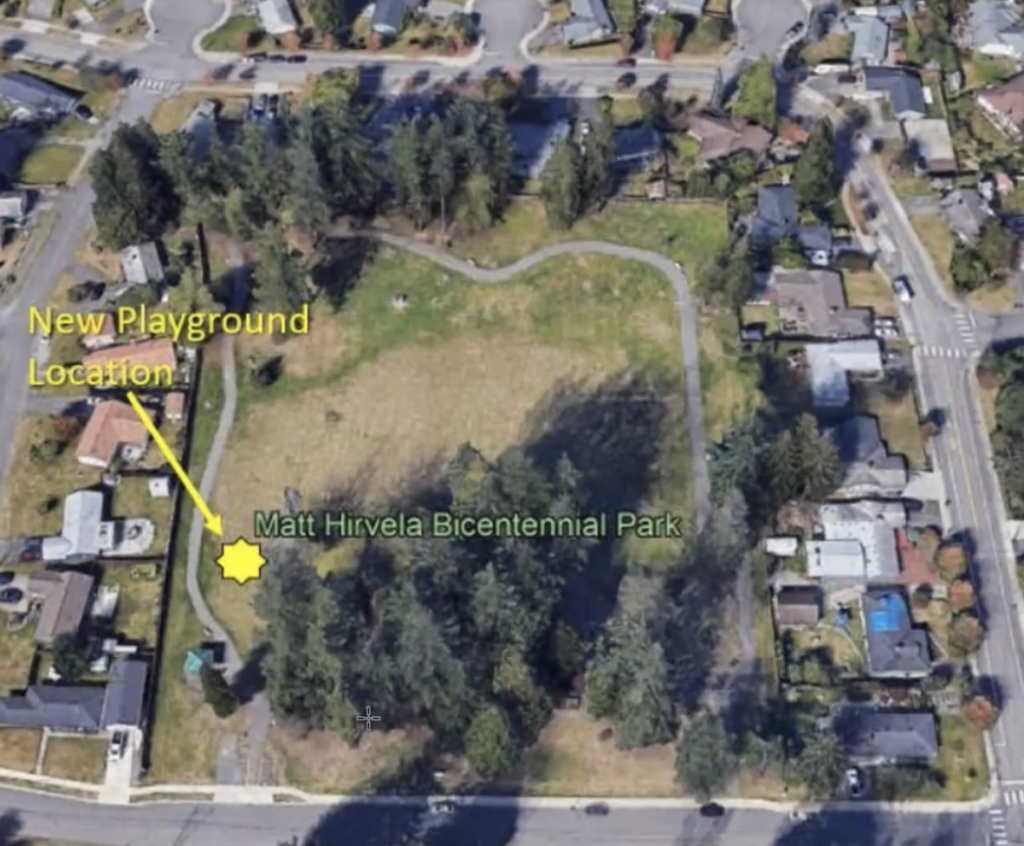 Betz noted that the 4.72-acre neighborhood park has had several improvements completed over approximately the past 10 years, including installation of the gazebo, lighting, monument, benches and sidewalk construction, along with a paved trail around the park’s circumference. He added that many of those efforts were undertaken by numerous groups of volunteers in coordination with the City of Mountlake Terrace and several smaller capital grants awarded by Snohomish County.

Betz said there are currently no plans to replace the park’s existing hay wagon play piece that is approximately four decades old and it may even be refurbished in the future.

The neighborhood park property was originally owned by resident Matt Hirvela who wanted the site preserved as park property. It was then acquired as a children’s park in 1968 with the aid of grant funds from the Washington State Interagency Committee for Outdoor Recreation and a land value donation from Hirvela.

The park was dedicated as the Matt Hirvela Bicentennial Park on July 4, 1976 during the U.S. Bicentennial celebration. Under the terms of the donation, Hirvela continued to live on the property in a log cabin on the southwest corner of the property until his death in 1980. The two-bedroom cabin was subsequently rented to private occupants for several years before its removal in 2012.

In other business, City Manager Scott Hugill told the council that the city is currently working on acquiring property to develop Gateway Plaza, which is a wedge of land between Van Ry Boulevard and the light rail station under construction on the south side of 236th Street Southwest. “We have funding from Sound Transit to help with both the Veterans Park trail and the Gateway Plaza,” he added, “so it’s not city funds being applied to this, as part of their pedestrian enhancement improvement funding for each station.” 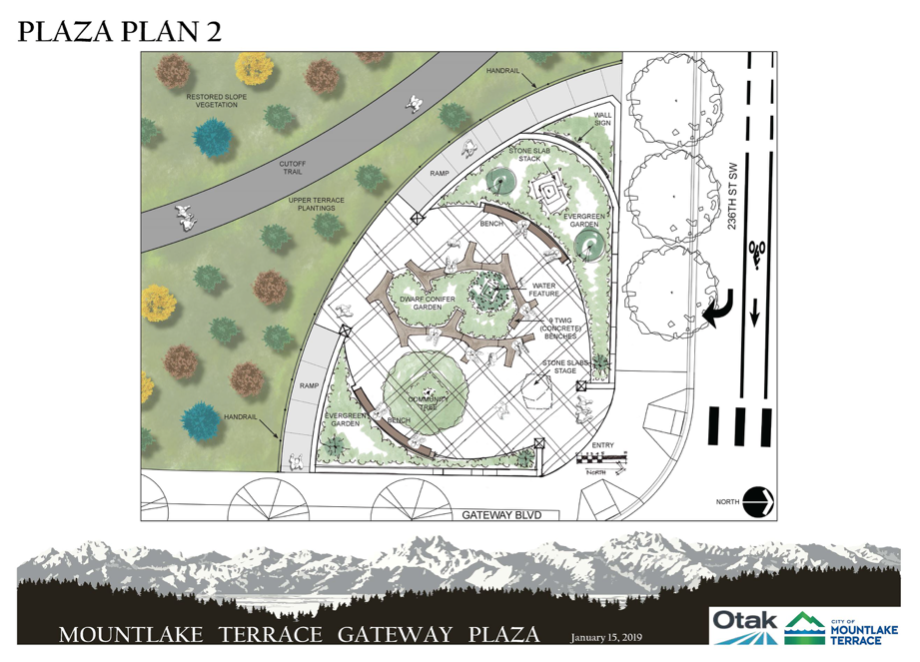 The city has engaged in talks with the owners of the nearby Terrace Station mixed-use development. “They’re aware of this, they’re supportive of it,” he said, adding that the city is also working with the Washington State Department of Transportation, which has the location’s right-of-way, “so we can get approval to do that plaza going forward.”

Gateway Plaza is planned to be a 2,000-square-foot hardscaped area located near the Mountlake Terrace Freeway Station that will function as a welcoming space for transit passengers and pedestrians. The plaza will also serve as a “gateway” to the area as it will be the first stop for light rail service extending north into Snohomish County. Construction of the plaza is anticipated to take place in 2023-2024 and be completed by the start of light rail service along the Lynnwood Link extension.

In addition, Hugill noted the City of Mountlake Terrace will be leasing “a few police vehicles for one to two months” while repairs are made to two patrol vehicles that were damaged in March when a suspect attempted to escape from police by ramming their vehicles in the Studio 6 motel parking lot. Hugill said the Mountlake Terrace Police Department would otherwise be short those vehicles that are in the shop. “We’ve done this previously and it’s a good way to supplement our fleet while a few vehicles are in the repairs,” he added.

The city has also contacted companies about proposals for providing supplemental landscaping maintenance work at the Mountlake Terrace Civic Campus, on Main Street along 236th Street Southwest and also along Lakeview Drive. Hugill told the council, “We have reached out to three landscaping firms for assistance with that – it’s beyond our capabilities right now with staffing to get caught up on that” work. He added, “At the same time, we’re having discussions about choosing lower maintenance vegetation on future street improvements so that we don’t have quite as many weeds going forward.”