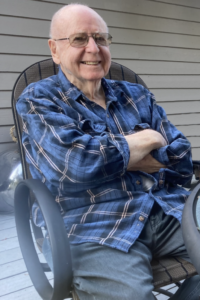 Gus Lehman, age 91, passed away in his sleep on December 26 at Flowerview Adult Family Home.

Gus was born and raised in Valley City North Dakota, 7th of 9 children. He served in the Navy 1950-1954. Gus married Sheila Marie Sullivan on July 9,1956 in Regina Saskatchewan. They moved to Seattle, then to Lynnwood in 1958. Gus worked for Veca Electric for 25 years. He was a member of the IBEW. After retiring in 1994 Gus split his time between Lynnwood and Mesa, Arizona for the winters where he enjoyed the company of his North Dakota friends and numerous new friends. He was a founding member of St. Thomas More Parish in Lynnwood, active during the years of the parish growth.

Gus and Sheila were married for 40 years until Sheila passed in 1996. Gus married Madelyn Churlin in 1998.

Gus was known for his kindness and the twinkle in his eye when he was “pulling your leg”. He enjoyed the last 5 years at Janet and Marvs’ house with the doggies that would come to visit with the girls. His children were with him daily to visit and watch Gunsmoke or the news. He appreciated all the love and care he received these last few years. Gus felt he had enjoyed a good long life.

Family and friends are invited to services Funeral Mass at 11:00am at St. Thomas More, 6511 176th St SW, Lynnwood WA, with a reception following.