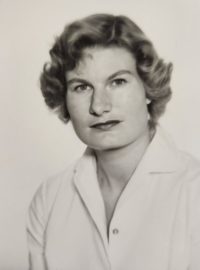 Aud Böning was born in Oslo, Norway and passed away in Edmonds, WA with her husband and daughters by her side.

After graduating from Oslo Cathedral School, she worked for a law firm in Oslo. In her 20’s, she traveled around Western Europe before taking a job as an Au Pair in Paris, while also attending business school there.

She returned to Norway for a while, before sailing with her cousin Liv to the United States. They landed in New York and after visiting with relatives there for a short time, they took a Greyhound bus to Los Angeles. There she worked as an Au Pair for a bit, but soon moved to San Francisco and got a job at a ship chandlery. Her boss gave her the idea that she could travel and get paid too! So she soon signed on as crew on a Norwegian cargo ship. On board she met her future husband, Gerd. They got engaged in Buenos Aires, Argentina and on their return to San Francisco the following May, were married. They settled in San Francisco in 1964 where they raised two daughters. After moving back to Norway twice, they came back to California for a few years. After vacationing in the Pacific Northwest in the late 70’s, they decided to move there and settled in Edmonds and lived there for 43 years.

Aud liked camping, boating, skiing, traveling and reading. Upon retiring, Aud and Gerd updated an old motor home and went exploring.  First in the Western US and later making a long circular trip around the entire country. Aud also liked Norwegian Rosemaling, knitting, writing, music and she loved reading. She had books everywhere!

She spent her last year in a care home, where Gerd visited her daily to take care of her. They would hold hands and reminisce about family, friends, the new and old countries and their travels.

She is survived by her husband, Gerd, her daughters Monika and Michele and her four grandchildren, Donovyn, Declan, Evik and Sonja.  Aud was a loving and caring person and will be sorely missed by all!