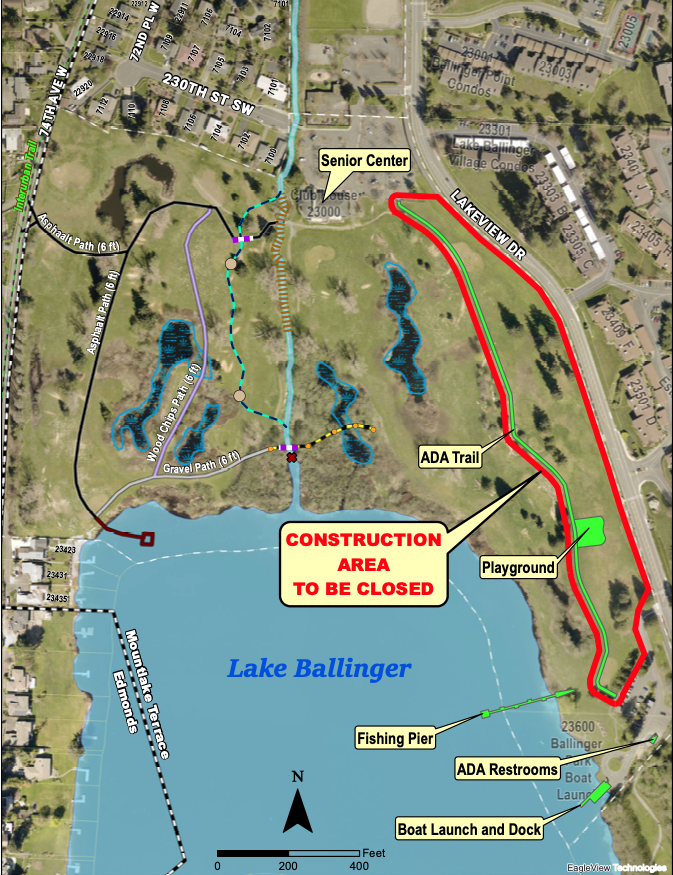 A new playground and trail are coming to Ballinger Park, resulting in a partial closure that will start soon and last potentially into fall.

In the days ahead, residents can expect to see construction begin on the long-awaited universally accessible playground, as well as the new accessible trail that will link the Mickey Corso Community Clubhouse, the new playground and the boat launch area.

These two projects will close off access to the large grassy area between the public beach and the clubhouse (also known as the senior center). The boat launch, fishing pier and senior center will remain open.

Work on the trail, estimated at $300,000, is funded in part by the Aquatic Lands Enhancement Account from the state Recreation and Conservation Office.

The 6,300-square-foot playground will be the first of its kind in Mountlake Terrace, and one of only a few in Snohomish County. Accessible playgrounds go beyond ADA requirements to be more inclusive for children with disabilities and sensory issues.

The playground project is budgeted at $750,000, with funding from generous partners, including the Hazel Miller Foundation ($250,000) and the Land and Water Conservation Fund ($250,000), plus city park impact fees.

Visitors should expect to see reduced parking in both the senior center and lake access lots at Ballinger Park, in addition to increased traffic as crews move about.

In a news release, the city said it appreciates the public’s patience during construction.

“It’s been great to see everyone enjoying all the new waterfront features that opened earlier this year,” City of Mountlake Terrace Parks Project Manager Donnelle Dayao said. “We’re excited to bring even more amenities to this spot, especially for families looking for accessible recreation.”

Ballinger Park is a 55-acre regional park near Interstate 5 and future light rail, and it connects the Interurban and Lakeview trails. Much of the land was a city-owned golf course that was converted to passive green space in 2012. The city completed the Ballinger Park Master Plan in 2015.