MLTnews Editor and Publisher Teresa Wippel and her husband live just across Lake Ballinger from MLT, in the Lake Ballinger neighborhood of Edmonds, and Teresa’s husband owns a business in MLT. Teresa is also the editor and publisher of My Edmonds News and Lynnwood Today, online community news sites for Edmonds and Lynnwood. Teresa has a journalism degree from Seattle University and has been a newspaper and magazine journalist in addition to holding other communications jobs. Teresa grew up in Ellensburg, where neighbors watched over each other and were always there to lend a hand or an ear. She is delighted to see that same small-town connection among neighbors and friends in the communities of Mountlake Terrace, Edmonds and Lynnwood.

Independently owned. MLTnews was founded in May 2009 by Dustin DeKoekkoek and acquired by Teresa in March 2012. It is supported by online advertising and reader donations, and the money raised stays in the community. Our freelance writers and photographers live in Mountlake Terrace and nearby communities.

Community service. Teresa understands the value of being in a community where people know your name and care about your well-being. Her dad was a local small business owner and served as Ellensburg’s mayor in the 1960s, and was always giving back to his community. Teresa also provides reduced cost or free advertising to deserving community organizations, and works with local high school and college journalism students.

Commitment to journalism. Teresa wrote for her high school newspaper and was a journalism major/political science minor at Seattle University, after which she began working for community and small daily newspapers and a wire service. Journalism is an essential cornerstone to American democracy and in a small town, it connects people to their neighbors and the institutions that they value: their schools, city government and community organizations as well as activities and events.

Commitment to value for advertisers. MLTnews is an incredible value for local businesses looking to get the word out about their products and services. Our readership continues to grow month-after-month and our pricing is very affordable when compared to other advertising opportunities. Please support our advertisers, and learn more about how you can advertise here.

Recognition. In January 2019, the Mountlake Terrace Business Association recognized MLTnews as its Small Business of the Year. And in March 2019, the Mountlake Terrace High School Booster Club presented Teresa with its Community Partner award, honoring the work of MLTnews to support sports, journalism and music at the high school. In Edmonds, Teresa received the Edmonds Daybreakers Rotary Club Business Professional of the Year in 2013, based on 1) Aspiring to high ethical standards in her occupation; 2. Recognizing the worthiness of all useful occupations and 3. Contributing her vocational talents to the problems and needs of society.

The reporter for MLTnews is Cody Sexton. Cody covers Edmonds School Board and Lynnwood City Council meetings, and also assists in coverage of Mountlake Terrace news. Cody spent his childhood in South Snohomish County area, and after almost two decades in other parts of the U.S., is happy to be back home. He attended Louisiana Tech University, where he earned a bachelor’s degree in journalism and worked for the college newspaper The Tech Talk.You can reach Cody via Twitter (https://twitter.com/codylsexton) or email. 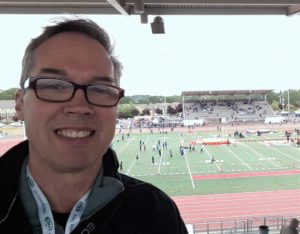 The sports reporter/correspondent for MLTnews is Doug Petrowski. The former editor of MLTnews, Doug and his wife Juley have lived in Mountlake Terrace for 20 years and have two daughters, who are both Mountlake Terrace High School alums: Maddy, a 2016 graduate of Seattle Pacific University and Amanda, a student at Biola University in La Mirada, Calif.

You can reach Doug at doug@mltnews.com. The sports photographer for MLTnews is Jonah Wallace. For more than 10 years Wallace, a Mountlake Terrace resident, has explored the Northwest, camera in hand, pulling images of urban landscapes and wilderness alike. He’s just as likely to be found on the sidelines of youth sporting events or a motocross track capturing tackles, goals, and muddy jumps.

Our Code of Conduct

By registering to post on MLTnews, you agree to abide by this Code of Conduct. While our code is in fact a set of guidelines, any deliberate violation of the following points — especially those that harm other members — will result in a loss of site privileges.

MLTnews users agree to not do the following:
— plagiarize the work of others, fail to acknowledge source material, or use images that belong to others without their permission;
— abuse, threaten or verbally attack other members, individuals, or MLTnews staff. We do not tolerate bullies, and we’ll do our best to spot them and get rid of them;
— post libelous, obscene or pornographic material or content that contains racist, sexist, homophobic and other slurs;
— deliberately post stories that are untrue, false or misleading or that make false representations about the poster him/herself;

MLTnews readers will:
— be accountable for stories they post and follow up by correcting known errors;
— resist attacks, insults and threats and instead remain civil and focused on the ideas being presented rather than the individuals expressing them;
— promote interactivity and dialogue that supports real community collaboration;
— avoid the use of ALL CAPS in their comments as that is seen by others as shouting. At a maximum, we request no more than three ALL CAPS word per comment.

Our anti-flaming/baiting policy:
According to Wikipedia, “Flaming is the hostile and insulting interaction between Internet users. An Internet user typically generates a flame response to other posts or users posting on a site, and is usually not constructive, does not clarify a discussion, and does not persuade others. Sometimes, flamers attempt to assert their authority, or establish a position of superiority over other users.”

Flamers tend to end conversations by entering them; they create a hostile environment in which real discourse is quashed in favor of insults and abuse. Deciding who is or isn’t a flamer, and how that contributor will be handled, is at the final and sole discretion of MLTnews staff.

Once a user has been pinpointed as a flamer, (one or more instances of obvious flaming, and/or reported flaming from other site users), the following steps will be taken:

1. Send the user a warning indicating that they’re at risk of forfeiting their membership. Sometimes we may also or instead post a comment in response to the comment in question.
2. Observe the user for signs of reform or response. Should the user reform or respond and apologize, they will be given another chance.
3. Should he or she ignore staff or continue the behavior, we will block him/her from posting to the site without further notice. All decisions will be at the sole discretion of the Editor.

The mission of MLTnews is to be an online community resource. As such, there is no room for hate speech or abusive or inflammatory behavior to make your point. Remember the golden rule: Treat others as you wish to be treated.

This Code of Conduct is based on guidelines established at NowPublic.com