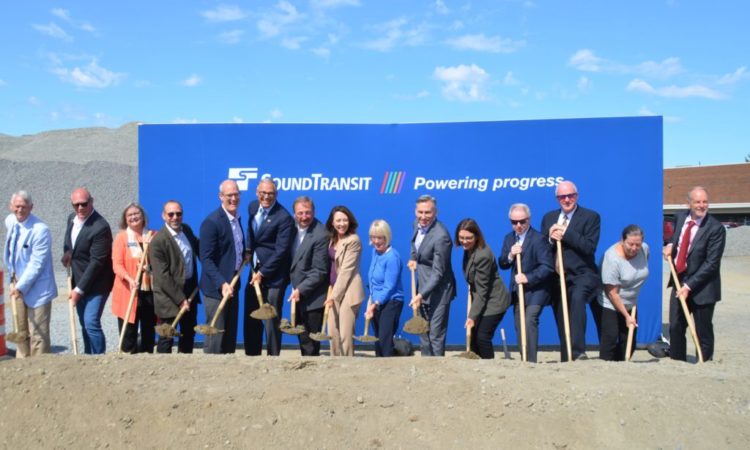 Sound Transit CEO Peter Rogoff pointed to the wide range of project support — from the federal government to local voters – as a sign that the region needs relief from the highway congestion drivers face daily.

“Today’s groundbreaking is the culmination of more than a decade of planning and preparation,” he said. “This project will be a game changer for Snohomish County commuters and in the years to come, we will be extending Link from Lynnwood all the way to Everett.”

The 8.5-mile, four-station extension project will connect Northgate to Lynnwood’s City Center district and take riders from Lynnwood to downtown Seattle in 28 minutes. The extension will include stops at Shoreline South/145th, Shoreline North/185th and Mountlake Terrace. Sound Transit plans to have trains visiting and leaving the Lynnwood station every four to six minutes during weekday peak hours. Trains are scheduled to begin service in 2024.

In addition to riders using light rail to commute out of the city, Rogoff said it will be essential in bringing more people and business to Lynnwood.

“Mark my words,” he said. “Once Lynnwood is reachable by light rail, we are going to see much of the same growth in jobs and business development here in Snohomish County that we’re currently seeing grow on the eastside.”

“As we see today, it’s the ongoing partnership between the federal government, local agencies, governments and taxpayers that will lay the tracks to build a modern infrastructure system in Puget Sound and throughout our state,” Murray said.

Additionally, the project has received a $658 million low-interest loan from the U.S. Department of Transportation’s Build America Bureau.

Gov. Jay Inslee said infrastructure projects like the light rail extension — and similar projects throughout the state — demonstrate a sense of optimism for the future of the city and Snohomish County.

“We are very optimistic about the future of Snohomish County and the state of Washington,” he said. “We are celebrating another monument to optimism.”

The light rail expansion is part of the City of Lynnwood’s plan to be a regional growth model and will be the anchor for the city’s planned City Center district. Mayor Smith said the light rail will connect the city to the rest of the region, bringing in more business.

“Lynnwood Link and all of the improvements that will come to our city as a result will be a catalyst for vibrant and interconnected communities that support living, doing business and enjoying life,” she said.

Early site work has already begun near the transit center, including utility relocation and demolishing the former Chevron gas station at the corner of 200th Street Southwest and 44th Avenue West. That work is scheduled to continue into 2020. Stacy & Witbeck/Kiewit/Hoffman JV and Skanska L300 JV will be handling the project construction.

Community members wanting more information about the project can contact outreach specialist Kurt Workman at 206-370-5664 or by email at Kurt.Workman@SoundTransit.org. Learn more about the project on Sound Transit’s website.

— Story and photos by Cody Sexton