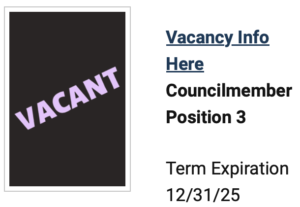 Thirteen individuals with a diverse range of community engagement and work backgrounds have applied for appointment to the vacant Mountlake Terrace City Council Position 3 seat. The position opened up in mid-December after former Councilmember Doug McCardle announced Nov. 2022 that he was resigning from the job.

The Mountlake Terrace City Council will interview the candidates Jan. 30-31, splitting the interviews into two days due to the volume of applicants.

Here is a brief summary of all those who applied, based on the applications submitted:

Stephen Barnes, a 36-year Mountlake Terrace resident, served on the committee for the Mountlake Terrace City Hall and Police Station expansions. In his application, Barnes said he believes the vision he can bring to the council in the next few years will help preserve the best of what Mountlake Terrace currently has while also assisting its adaptation into “the new age of a true Puget Sound city.”

Nicholas Bennet has lived in Mountlake Terrace for eight years and works for ACTEnviro, a waste management service. Bennet said the most important issue that Mountlake Terrace faces is how it will cope with scaling its services and infrastructure as it evolves into a higher-density city.

“If we scale poorly, we risk loss of service to the public or could be limiting growth,” he said.

Michael Bus has resided in the city for five years and works at PNW Financial. Bus said he appreciates the plethora of community events that are offered in Mountlake Terrace, adding that the city’s sense of community “[gives a] small town feel in the midst of a large metropolitan area.”

Bus said the most important issue facing the city is the lack of available housing for larger families.

“Many of these homes are small, unaccommodating to families of two or more people and not energy efficient,” he said. Bus wants to find solutions to retain growing families in the city rather than losing them when they outgrow their homes and cannot find any larger options in Mountlake Terrace.

Joe Cross, a self-employed, two-year Mountlake Terrace resident, moved to the U.S. from the United Kingdom and said Mountlake Terrace “feels like home.” He enjoys volunteering in the city whether at community events or assisting his elderly neighbors with help around the house. Cross said the biggest struggle for Mountlake Terrace is balancing the new and the old.

“It is clear that there are areas of the city that need either modernizing or rejuvenating, and new development is needed too,” he said. “However, it is also clear from the existing residents that the heart and soul of the city should not be lost.”

Cross also said he hopes to bring more positive focus to small businesses in the city.

Ned Daniels has lived in Mountlake Terrace for over eight years and currently works for the Edmonds School District. Daniels served on the Lynnwood City Council for nine years in the 1990s and has volunteered at many community events.

The overall development and growth of Mountlake Terrace is what Daniels wants to focus on if he is appointed to the city council. He said he plans to develop thoughtful, long-term plans with the council that focus on adequate city funding.

Marcel Englmaier works for Expedia Group and has called Mountlake Terrace “home” for almost two years. Relatively new to the area, Englmaier has not yet had time to delve into community events, but said he hopes to get deeply involved as he becomes acquainted with the area. Englmaier said he would like to join the council with an open mind.

“I don’t like going into things with strong opinions and ready to start a fight about stuff,” he said.

Isaac Harrison works for the Sno-Isle Libraries and has lived in Mountlake Terrace for seven years. For the past three years, Harrison has been a member of the city’s civil service commission, the city planning commission and the Snohomish County Tomorrow community advisory board.

Harrison said the lack of variable housing types as well as unaffordable housing prices are large issues he would want to focus on if appointed to the city council.

“This is a national problem, but I don’t think the best we can do is say it’s too big an issue to deal with locally,” he said. “If anything, starting locally may be the only way it’ll ever be addressed.”

Amy Langfeldt, a business technical analyst for AT&T, has lived in the city for 18 years and currently serves on the civil service commission in Mountlake Terrace. Langfeldt said Mountlake Terrace is “the perfect hub” – close to everything while still maintaining the small-town feel.

Homelessness is the biggest issue on Langfeldt’s radar, and she said she hopes to bring an “honest and down-to-earth” voice to the city council to address this issue.

Mahmoud Mansour has been a Mountlake Terrace resident for 21 years. Working for Denali Advance Integration, Mansour said that while his background is in technology, his heart “has always been with my family and my community.” Mansour’s family immigrated to the U.S., and he said they have felt nothing but welcomed in the community of Mountlake Terrace.

Mansour said he believes the biggest issue the city faces is the increase in crime. While there is not a simple solution to this issue, he said he hopes to be able to work closely with city councilmembers and administration to “find solutions through tough love.”

Monique Moore, a 10-year resident who works for the Wild Alaskan Company, said her favorite thing about the community is how friendly everyone is and how willing they are to help one another in times of need.

Moore said the biggest issue for the city is its public safety and outreach. She hopes to benefit the city by helping the council find long-term, sustainable solutions to these issues rather than quick fixes that will need readjustments in a few short years.

William Moore has lived in the city for 26 years and works for the Edmonds School District. Moore has enjoyed volunteering with the parks and recreation department as well as at multiple community events in the summertime.

Moore said he believes light rail transportation is an issue the city should be spending more time focusing on.

“The more accessible it is for residents to get to and from the station, the more it will be utilized,” he said.

William Paige, Jr. has been a Mountlake Terrace resident for about two and a half years and works for the Shoreline School District. Paige has volunteered for multiple community events and is the current chair of the city’s diversity, equity and inclusion commission.

Paige said he hopes to create meaningful dialogue between the city council and residents regarding the city’s housing issue.

“There are residents who are fearful that they are going to get priced out of their community and out of the city,” he said. “I think one way to [address] this is to develop better ways to get the community engaged in conversation.”

Paine-Donovan said he is concerned with the city’s staff retention and administrative capacity.

“I am concerned that without adequate funding and support of staff, city government will not be able to respond to the multitude of new challenges that are on the horizon,” he said.

The individual chosen for the Position 3 seat will serve until November 2o23. The new councilmember will have to run for election in November to fill out the remainder of former Councilmember Doug McCardle’s term, which runs through November 2025.